Second Episode of "Superman and Lois" 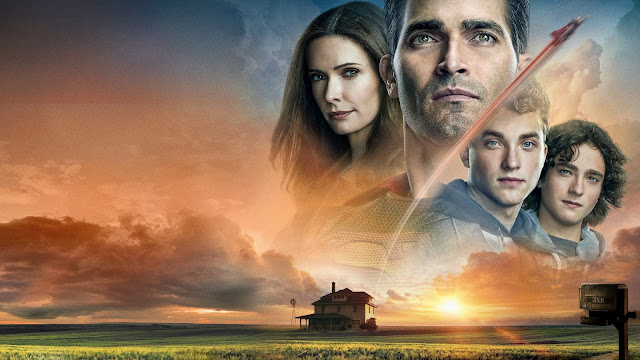 In the afternoon, before Episode 2 of the new CW show Superman and Lois even aired (on 03/02/2021), the CW renewed the program for a second season.  Those numbers on the pilot must have been really something, because that show cannot be cheap to make, and they didn't even bother to see how the show did Tuesday night when viewers would vote with their feet based on what they'd seen.  My guess is that streaming numbers were very good, indeed - and, I think it was shown on WB owned TV channels TNT and TBS to catch any cable-bound stragglers.

The notion of *why* the show was working for me kind of kicked in during episode 2. And it's both totally obvious based on the premise, but for me - as someone who has thousands of Superman comics, has seen countless hours of TV and movies, read multiple histories of Superman...  it somehow didn't quite resonate til it did.

Superman got to move on.

It's not just that, yes, that's the premise - but they're treating it like we caught up in media res.  Superman is a fact, he's been around for almost two decades, I'd guess.  So... what happens when he's pushed forward from his eternally looping young adulthood into the next phase?  They're committed, and it's the core of what the show is doing here in the early episodes.

For fifty-odd years Superman and Lois were flirting, since the early 90's, they've been married.  What stories can we tell now that Superman has kids?

If Superman comics and other media have repeated themselves over the years, the show is a fresh start while you retain everything you know.  That's something DC Comics leadership has desperately attempted over and over for the past fifteen years (there's a new gang at DC, and I can't say I think they're doing too badly from what I see coming  the change in titles from DC Comics leadership and what's been in the solicitations) and failed to land.  Because it feels like the comics don't quite know how to commit to much more than "Lois is no longer an attractive problem to be solved, she's now a partner."  The writers want to keep writing super punch ups instead of understand that the super punch ups can be ancillary to the lives and growth of a character (this is a Big 2 and superhero problem, writ large, not limited to Superman).

The potential for new kinds of Superman stories is vastly broadened, especially as the actors playing the sons of Lois and Clark age and mature.  There's no rulebook for how the children of Lois and Clark would be, there's no canonical super-kids story, despite many attempts.  But by pushing beyond early adulthood and making Superman and Lois parents/mentors as well as fulfilling their usual roles - all of the dynamics change.  And, we can see what hard-fought-for romance looks like when it's still alive and kicking two decades in.

Sure, I'll miss Perry and Jimmy and the bustle of the Planet, but I will also trade it for a third chapter here for these familiar characters who have already been pegged as the cool aunt and uncle of the superhero world.  Maybe being the cool parents is an unexpected upgrade?

I'm not sure the show will appeal to young adults in the same fashion as other CW fare, but perhaps audiences stradling those age groups as families see themselves reflected in a household with multiple viewpoints while, you know, transdimensional threats lurk on the periphery.

As a Lois fan, this episode hopefully will give the doubters about Lois' role on the show a bit of comfort.  She's still the smartest and ballsiest one in the room, and she still understands the role of the press when, IRL, I am not so sure we have too many of those left.

I appreciate the honest challenge of city-liberal Lois facing down the earnest desires and hopes of the citizens of Smallville as a potential threat rolls into town in the shape of Morgan Edge (who we know from the comics is just a walking problem).  But for new TV viewers, he's just a guy who may or may not be helping out Smallville, and he's offering something Lois' reporting can't - jobs and potential security.  And Lana's husband as the practical countervoice is worth considering, even if we suspect he might be wrong about the dastardly Edge.

The show knows it has 15 episodes this season alone, so it's not giving us a Superboy quite yet.  I did find the casting of Jor-El a bit... weird.  I know Brando played the character when he was no longer a kid, but technically, Jor-El was a young father when he died, not old enough to be Tyler Hoechlin's father now.  Why is the hologram of a guy who looks 60?

I really don't know much about high school kids, but I do appreciate that the show didn't start off with "well, one of them is a douchebag jock" (although I am sure some are still so mad at high school they're reading it that way), nor is the brooding one a dreamy poet or whatever.  And while I am sure bro v bro tension will arise, they also aren't starting off with some ginned up animosity that has to get ignored so the family can sit down together for lunch.

The interjection of a parallel dimension "bad" Superman and a Luthor unlike any prior incarnation are also a fine slow-burn mix to the proceedings, and I'm okay with the show not going for a freak of the week so they can give the stories room to breathe.  But I especially appreciate that - while taking notes from the fight scenes in Man of Steel, I genuinely think this show managed to pull off a similar idea but better understood how to keep actors in frame to the audience can best follow the action.  In two episodes we've seen better live-action Superman battles than anything to date.  That's no small feat - and just another aspect of how much care went into the production of the show.

And, we got Chrissy Beppo, who is sure to become the imaginary girlfriend of very nerdy guys across all the land.  But she's actually terribly sweet.  It's a welcome addition.

Anyway - what a time to be around for superhero media.  This month we'll have 3 DC shows on network TV and by end of month (S&L, Flash and Black Lightning), WandaVision and Falcon and Winter Soldier on DisneyPlus.  And, of course, Supergirl, Stargirl, Loki, Titans and Doom Patrol are all coming.  And I know I'm missing some.