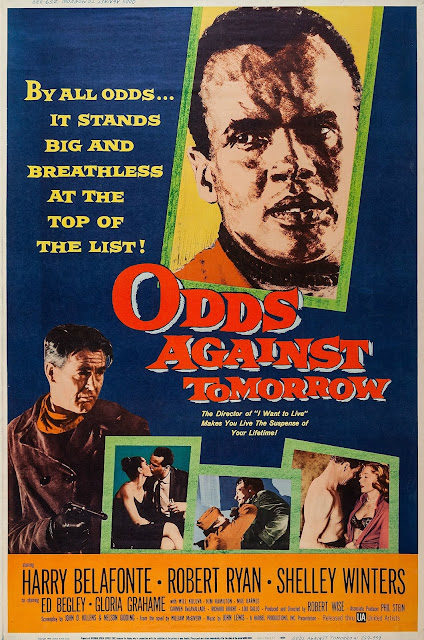 Watched:  02/28/2021
Format:  Noir Alley on DVR
Viewing:  First
Decade:  1950's
Director:  Robert Wise
A year or two ago, twitter-friendly comics artist and classic movie buff Patch Zircher suggested the film Odds Against Tomorrow (1959) my direction.  This last weekend, the film aired on TCM's Noir Alley, so I was able to get the Eddie Muller discussion to frame the production and story.
The talent in the movie is undeniable - Signal Watch faves Robert Ryan and Gloria Grahame star, along with Ed Begley Sr. and Shelley Winters, and Harry Belafonte, who I think Jamie was eager to see (me too, maybe for different reasons).  But the talent behind the camera is also entirely notable.  Expert filmmaker Robert Wise was listed as both Director and Producer, Abraham Polonsky was secretly the writer (but blacklisted at the time, did it under cover), Joseph C. Brun as cinematographer, and the great Dede Allen in an early job as editor.
Cicely Tyson shows up in a very early role (with maybe one line), "she looks familiar because she's in a ton of stuff" Kim Hamilton, and Carmen De Lavallade.  But I know a good portion of the audience is showing up for Belafonte, and I can report:  he is handsome.
Structurally, and as raw entertainment, the film is a classic heist picture.  Ed Begley is a disgraced former cop who has figured one big score, and he's pulled in way, way down on his luck gambler Belafonte, and he's called in Ryan, who plays a frutrated heel and overt racist with a violent streak to be muscle and triggerman.  There's a bank that's ripe for the taking in upstate New York.
All three are flawed men, and Belafonte plays no kind of angel.  His wife has left him and while the sexual tension still runs hot when they're in the room together, whatever he did to let her down was catastrophic.  And now he owes thousands on the ponies.  Ryan hasn't worked in forever, and he's shacked up with Winters, who is so stunned to have a man, she lets him get away with low-burn mental abuse.  Meanwhile, Gloria Grahame (in her full Grahame-ness) lives upstairs and is maybe flirting a bit too much with her neighbor.
The framework also plays out as no one is sure the job is worth it, but both players find they're driven to give it a shot.  But - and this is where the movie deviates and feels particularly interesting - Ryan's racism is on his sleeve, and Belafonte is no pushover.  The open racial dynamic in a world where a Black man sees himself as an equal in 1959 feels like it's the first thing to crack the door that would be thrown open as Belafonte and Poitier, and lead into larger Black cinema movements that echo through today.
Unfortunately, it's nearly impossible to see much personal progress on the part of many people between this 1959 movie and today when it comes to the sort of character Ryan ably portrayed in a few films.*  As it must, the heist goes bad in no small part because (a) it's a heist movie and you can't plan on the unpredictable, but (b) it can always be worse - when one of you is a complete jack-ass.
It's fascinating to see a movie just 10 years on from when it was rare to see a Black man on film in any sort of role beyond very supporting to seeing the fully fleshed out life Belafonte made sure was on screen - as the movie was produced through his company, HarBel.  He didn't need to portray a perfect paragon of virtue to show Black life, and, in fact, the complexities run deep between his character and gangsters, his boss, and his home life.  Anyway, don't bet on the ponies, kids.  It's a sucker's game.
At the film's start, Muller said this film is considered by some as the *final* of the original noir films, and I can see why. You're in the precipice of 60's filmmaking (and if you asked me what year the film was, I'd swear it was 1961 or 62).  The look of the film hints at what film school made me write down a whole lot:  cinema verite.  It just doesn't look like a film from 1950 at all, from film grade to lighting to shot selection.  And, of course, the editing is Dede Allen, and she's bringing a whole new sensibility to the movie that more formulaic editing of the prior 50 years wouldn't have dreamed of trying, or would have been seen as a mistake.
It's also worth noting that the DP, in addition to collecting some masterful shots that would have done Alton proud, as well as a wordless sequence that goes on for some time, but works like crazy, also knows how to shoot Black people, the problem of which many didn't (and continue to not know how to do) is one of Hollywood's not-so-secret-secrets.
We had to pause the movie half-way through, and I didn't even prompt Jamie when she looked at me and said "this is really, really good."  And, I am not arguing with the lady.  The movie was fantastic.  Tight noir thriller, wonderfully acted and shot, and - as we talked about in Native Son, there's so much more going on as commentary with the film that elevates the movie beyond a solid heist flick.
*Robert Ryan was, when not acting, a supporter of progressive politics and causes and reportedly played the roles he sometimes did (and he's amazingly believable as an SOB), to be a part of telling stories that showed such characters he felt he'd known in real life.
Posted by The League at 3/02/2021 12:13:00 AM