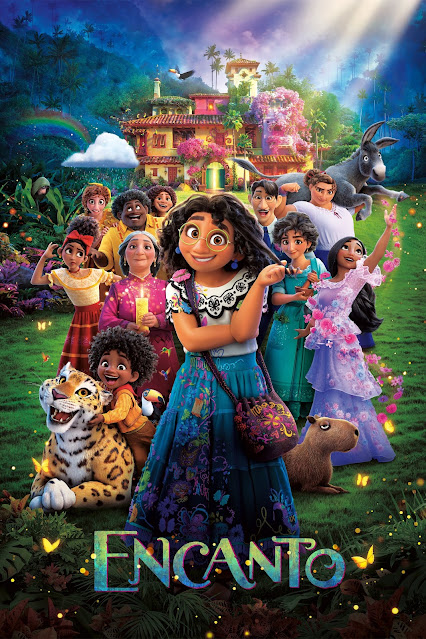 Watched:  01/08/2022
Format:  Disney+
Viewing:  First
Directors:  Jared Bush/ Byron Howard/ Charise Castro Smith
Disney has really doubled down on the "here's a big ol' metaphor, but we're also going to explicitly spell it out" style of storytelling that Pixar's been doing for a while.  That's not a dig.  You're playing to an all-ages audience that needs some hand-holding, and in general, for who these movies are for, I think it works.
I'm not surprised I liked Encanto (2021).  I'm honestly far more surprised when I am not onboard with a Disney film or find it just "meh".  After deconstructing the idea of the Princess movie with Frozen and Tangled, and doing some fun character stuff with Wreck It Ralph, essentially doing a family dramedy is a good pivot.  And it's kind of remarkable we're in an era where we aren't depending on wicked stepmothers and cheesed-off sorceresses to tell a story.  Sometimes the conflict can be person vs. themselves.  But this one also has baked in protagonist vs. society and fate, I guess.
There's a lot going on.
The Madrigal family (of Columbia) have been granted magical powers, each different.  Except for Mirabel (Stephanie Beatriz!), who (traumatically) did not receive any "gift" on her "gifting day".  The family use their abilities to help their adopted village, which is thriving in no small part due to their assistance.  When the latest Madrigal child steps up to get a "gift", Mirabel feels her lack of "specialness" acutely, but also realizes that something may be amiss with the magic gifts of her family and their magical home.
The film features name voice talent, from the aforementioned Beatriz to Diane Guerrero (Doom Patrol),  to Wilmer Valderrama and John Leguizamo.  And, of course, songs by Lin Manuel Miranda.
The design on the film is worth a whole of typing alone.  Beautifully conceived and executed, it's not hard to imagine Disney Parks deciding they can and will build a magical Casita for gawking tourists to explore.  It's a stunning reminder of the kind of visions of a Mary Blair who spoke in color palettes and took special inspiration from her trips with Walt to Latin America.  But the level of detail and carefully considered architecture, costuming, even tile-work is extraordinary and shows what the crafters at Disney are capable of delivering 30 years after Little Mermaid.  Every Disney picture for decades has been gorgeous, and this one has it's own unique visual stamp.
I might argue that there's *too much* going on in Encanto.  While there's a straight line for Mirabel, a large cast is introduced, but aside from a 3rd act quasi-heel turn and re-pivot by Abuela, the movie seems to want to get you to know and like the other characters, but only Bruno gets enough screentime to feel like a complete character.  Isabella's "Let It Go" moment isn't so much unearned as - it just sort of happens, so we're not terrifically invested in her when she starts to sing.  Luisa, the super-strong sister, basically doesn't talk until she gets a whole song, and it's not a "here's who I am" song - she's working through her.
In a way, Encanto feels like it should have been a series of episodes about the family with the underlying story of Mirabel discovering her power (which is never really clearly defined.  Tell the truth?  Make people deal with their shit?  Care?) and saving the family.
The directors do corral what's kind of a sprawling mess, and it does have a patented smile/ cry Disney ending that is essentially satisfying.  And I'm not sure "I would have spent hours more with the characters" is the worst criticism I can levy.  But it feels like a 90 minute movie's grasp over extended it's reach with the pile of ideas they wanted to sort through.  In the end, though, the story of the "unspecial" one with a family carries plenty of weight, and manages to tap into something universal, whether you're talking family or some other group.
Posted by The League at 1/10/2022 04:32:00 PM