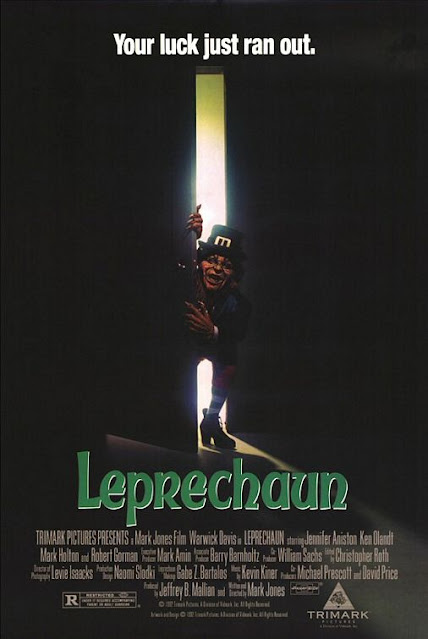 Watched:  03/11/2022
Format:  Amazon Watch Party
Viewing:  Second
Director:  Who knows and who cares
I watched Leprechaun the first time at a party during what I think was Christmas break 1993.  I don't really remember much about it except for that the Leprechaun was a vicious dick and it featured Jennifer Aniston before I knew who she was.
It follows the same pattern as a lot of horror from that era, and this era.  People are in a country house of some kind, and a dangerous force attacks.  The house actually looks quite a bit like the house from Critters or five dozen other movies of the era.  In this case, an Irish immigrant has returned home from a funeral and brought with him a bag of gold he stole from a leprechaun (Warwick Davis).  Now in the Western United States, he rightfully assumes he's safe from a magical being an ocean away.
He's not, but he traps the leprechaun in a box for a decade until Jennifer Aniston and her dad show up to rent the house.  The movie also features a "hunky guy" house painter for Aniston to latch onto, his kid brother and the guy who stole Pee-Wee Herman's bike playing a moron.
A bit about the thing with Mark Holton's moron...
This movie was written and directed by the same person, Mark Jones.  Jones had a vision, and that vision included needing to keep the gold away from the Leprechaun so he could torture the cast via Leprechaun.  Once they hear the Leprechaun asking for his gold, they should just give him the gold and he'll let them be.  In order to keep this from happening, he has the child in the film (a) inform the moron he's a moron, which he did not previously know, and (b) that he's secretly ridiculed throughout the town for being a moron but (c) with the gold, they can pay for a brain operation to fix his brain and (d) this operation does not exist.  It isn't a thing, even in the movie's world of leprechauns.
It's insanely cruel.  And only serves to give the shitty kid a reason to hang onto the gold.  But that motivation makes absolutely no sense.  I mean, sure, he probably really wants the gold for bubble gum and video games, but he never says that, and I ASSUME he wants to live.  He makes it sound like he's propping up the moron, so... is he?  Like.  I have no idea.
But it's also a movie that depends on the leprechaun - who is smart - attacking everyone and asking for his gold when they clearly do not have his gold.  It's like me showing up at my office from 2012 and manhandling the person now dwelling inside because I want my stapler.  I'm not saying the leprechaun isn't a vicious little d-bag who puts torturing people first, but - he does seem to need his gold.  And there's nothing about Anniston's LA Gear kicks that says "she has me gold".
The Leprechaun loves vehicles and wheels.  I suspect this is to ensure the actor can both get from place to place quickly in the film, and provide a few visual gags that work pretty well.  But at some point, it really is a whole thing and it goes totally unremarked upon.  Unlike his weird shoe fetish, which... you know, The Signal Watch is a no kink-shame zone.
Do I love this movie?  No.  Is it bad?  Very.  In a fun way?  ehhhh.  This movie came out in the salad days of the indie era, and the midst of the "teens rent anything at Blockbuster that looks like a horror movie" phase.   It spawned like 7 sequels. I guess because audiences are both dumb and loyal.  The director could have made something good and it probably would have been seen back then, but instead... we got this.
I'd be remiss if I didn't point out, (a) this movie features Aniston's original nose, which is super cute, and (b) ample, ample shots of Aniston from behind.  Which I am guessing - revisiting 90's film will surely include way more ass than I am used to in 2020's film once twitter alerted the kids to The Male Gaze.
Do I recommend Leprechaun (1993)?  In no way.  But.  Warwick Davis looks like he's having a hell of a good time, and maybe renting it will send some money his way.  He is absolutely not the problem with the movie, minus a fleeting Irish accent.  And I want Warwick Davis to be happy, so give him a dollar.
Posted by The League at 3/12/2022 11:41:00 AM