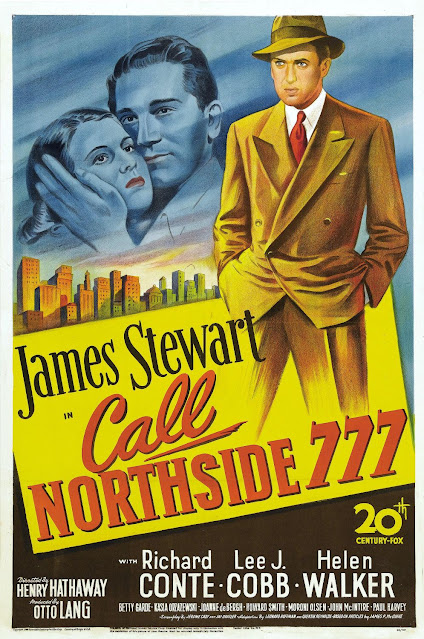 Watched:  11/08/2022
Format:  Criterion Channel
Viewing:  First
Director:  Henry Hathaway
Criterion Channel is currently featuring a load of films they're calling "Film Noir" from 20th Century Fox, and I wanted to finally give Call Northside 777 a whirl.
As much as I enjoy a film noir from a poverty row studio, Tuesday we made the conscious decision to see something a bit more prestige, and which had been on my punchlist for a while - a noir that starred Jimmy Stewart, who I usually associate with noirish-thrillers later in his career when he shows up in Vertigo, etc... under Hitch.
The thing, though, is that despite the fact that I've seen Call Northside 777 (1948) referred to as film noir for two decades, much like The Damned Don't Cry, I don't think this movie actually qualifies as film noir.   It certainly *looks* like noir.  Cinematographer Joseph MacDonald, who also shot one of the noir-iest noirs - Pickup on South Street - gives John Alton and James Wong Howe a run for their money (My Darling Clementine similarly has some noir-ish stuff for a western).  But...  there's no femme or homme fatale.  There's no one in over their head because they followed an ill-advised path/ chased a skirt.  There's no one who has crossed paths with the wrong person and is now in an existential crisis.
Instead, this "ripped from the headlines" film, which is based on a true story, is presented surprisingly faithfully for Hollywood.  It follows a newsman (Jimmy Stewart) who goes from covering a human interest story about a mother offering $5000 (in 1940's money, that's roughly $91K now) for information that could exonerate her son (Richard Conte) who was arrested for the murder of a police officer in a Polish neighborhood speakeasy in 1932 Chicago.
Stewart is pressed by his editor (Lee J. Cobb) to follow up on the story, which doesn't seem to have much of an angle other than that a mother wants to believe her son is innocent.  The case went to the Illinois Supreme Court and everything is in order.  Conte's wife has divorced him (which I guess in the 1940's was taken as a sign of belief in guilt?) and things look bleak.
But at the end of the day, this is a movie - in the middle of the Code-era - that basically states the system is broken, cops can be corrupt liars or incompetent or both, and the deck is stacked against anyone trying to clear their name despite a mass of circumstantial or even concrete evidence.  And that politics can truly fuck a guy over.
In almost all ways, given the eye on police in America over the past few years, the story feels like it happened yesterday.  Substitute a working class Polish guy for name-your-minority and nothing about what happens to him sounds out of line from your average Dateline jail-house interview story, or, indeed, the Serial podcast.   Incompetent lawyers.  Cops who need an arrest.  A few inconsistencies in stories creating supposedly massive holes in a defendant's alibi.  And, boom, 10 years later with 89 more to go.
What feels like an absolute throwback - despite my citation of Dateline and Serial - is that the press takes an interest.  Or, maybe to the point, that this is a movie about the power of the press in an era where the press is far too often nothing more than an outlet for amplifying talking points and may not even have the resources to do any significant investigative journalism, let alone feel like they should risk publishing a counter-narrative.
What feels absolutely true is that TPTB come down like a bag of hammers to slow Jimmy's roll on the series of stories, and protecting the system is seen as far more important than the execution of justice.
The movie simply feels complete, reflecting a very real world that goes from the marble halls of power to the tenements of immigrants working as cleaning people to save pennies that they have the $5000.  The supporting characters are sharply drawn, communicating who they are and what they need in short bursts of dialog and performance.  I mean, man, Conte's mother in this movie reminded me so much of my Finnish grandmother (the mother is Polish in this film) that I was probably overly pre-disposed to love her, but here we are.
Before putting the movie on, I had no idea it starred Lee J Cobb and Richard Conte as well as Stewart.  I'm a big fan of the work of all three and any single one of these actors is a major draw for me as a viewer.  And, man, they don't disappoint.  Stewart is in high-dudgeon mode by the film's third act, Cobb gets to turn his powers to playing a shrewd good-guy who speaks and works in subtext, and Conte is just utterly buyable in everything - including playing the convict that shouldn't have been.
But none of this is noir.  Movie celebrating the power of the press and everything turning out okay in the end is not really part of the idea of noir for me - unless you want to say "yes, there's actual police corruption in the race to convict someone.  Anyone."  Which feels more like a fact than a character beat.  Stewart is never threatened physically or job-wise.  He may have lost some innocence, but that's pretty much every story.  But everyone else seems to think it's noir, so I'll keep it slotted in the category.
Posted by The League at 11/10/2022 10:42:00 AM