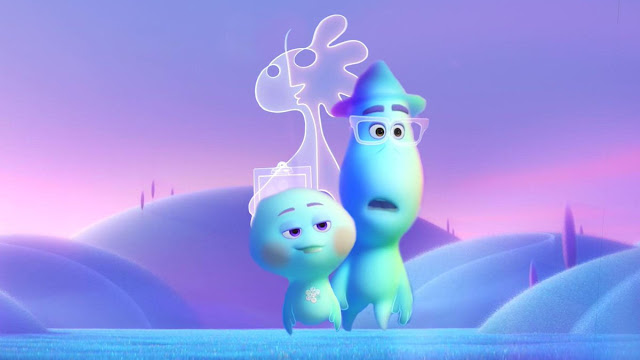 Watched:  01/30/2021
Format:  Disney+
Viewing:  Second
Decade:  2020
Directors:  Pete Docter, Kemp Powers (co-director)
For more ways to listen
Ryan and Nathan are joined by Pixar Lighting Lead, Ryan Michero, to talk about "Soul", now available on Disney+. We take a deep dive into the technical wizardry and challenges of "how does one light a conceptual construct?" to discussing the process and storytelling that makes Pixar the best there is. Join us for a conversation with one of the folks who makes the magic happen!
The Signal Watch PodCast · 137: "Soul" (2020) Pixar Watch w/ Ryan Michero, NathanC and Ryan
Music:
Born to Play - John Batiste, Soul OST
The Great Before/ U Seminar - Trent Reznor and Atticus Ross, Soul OST
NPR Fresh Air episode
Disney History Playlist
The Signal Watch PodCast · Disney History with NathanC
Posted by The League at 2/01/2021 11:49:00 PM No comments:

for more great videos from Austin Books and Comics, visit ABC's YouTube page/ channel/ internet page that makes with the tv pictures.
Posted by The League at 7/07/2011 04:44:00 PM 1 comment:

You can thank Ransom from Chronological Snobbery for encouraging me to wrangle up some interviews for Free Comic Book Day!

This Saturday, Cullen Bunn and Brian Hurtt, creators of the new comic from Oni Press, will be signing at Austin Books and Comics here in Austin, Texas.

The owner of Austin Books (who is sincerely a great guy) put me in touch with Cullen and Brian. I'm very excited to present what I hope is the first of many creator interviews here at The Signal Watch.

I encourage you guys to come out and meet these guys and check out their comic!

Can you tell me a little about yourself? What previous work might our readers know about?

CULLEN BUNN: Besides a couple of short stories, my first work in comics was THE DAMNED and its sequel THE DAMNED: PRODIGAL SONS (both with Brian, both from Oni Press). I also write the Bride of Nine Spiders issue of Marvel’s IMMORTAL WEAPONS. Aside from that, I’ve written a ton of short stories for various magazines and anthologies.

BRIAN HURTT: I've been doing comic work here and there for the several years, now. I've done several projects with Oni Press, such as QUEEN & COUNTRY and THREE STRIKES as well as working with Steve Gerber on HARD TIME at DC. In the past couple years I've been fortunate enough to focus mainly on THE DAMNED and now THE SIXTH GUN--both with Cullen. 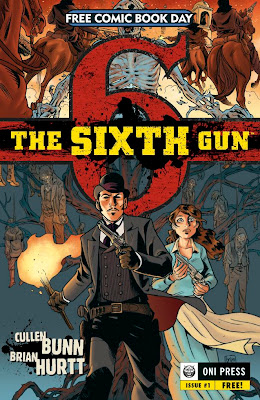 For someone entirely new to your work, lay it on me: What's your elevator pitch for "The Sixth Gun"?

CB: THE SIXTH GUN is an epic dark fantasy set in the Old West. The story is centered on The Six, a set of magical revolvers that first appeared during the Civil War. The most powerful of the revolvers vanished years ago, and dark forces have been searching for it ever since. As our first issue kicks off, we learn that an innocent girl has come into possession of the weapon. This, of course, makes her a target.

What was your reaction when you heard "The Sixth Gun" was going to be a part of FCBD?

CB: I was really excited and honored that Oni Press wanted to release the first issue as part of FCBD. I’m thrilled that so many people can get their hands on the book, and I can’t wait to hear reader reaction.

BH: I was thrilled! Oni has been behind this book 100% from the beginning and they believe it in so much they're willing to give away the first issue of the series for free. I honestly believe that if we can just get this book into the hands of people we can get them hooked right at the start. There's no better way to do this than through FCBD.


What drew you to the material? The bit I've read about the premise is intriguing.

CB: I’ve always loved big, broad-scoped fantasy stories, and I’ve always thought the legendary Old West has a kind of rugged magical quality that just speaks to me. The world and the characters and the story itself are all just a lot of fun. Hey, I’m never going to complain when I get to write stories about outlaws and monks with gatling guns and monsters and really, really nasty villains.

BH: I love a good western and like almost every comic artist I know, I've always wanted to do one. I also thought that Cullen and I could bring something unique to the genre. There's been a lot of westerns over the years. There's been some horror western mash-ups and supernatural westerns. But THE SIXTH GUN is an interesting blend of horror, fantasy and the western. But on top of all that it's more than just a clever mash-up of genres--it's really it's own fully realized world. One that we hope to play in for quite a while!

But, to backtrack a bit, the number one thing that drew me to the project was that Cullen was writing it. He had me on board from the moment he told me the title.


Can you talk a bit about what readers can expect for the issues following the FCBD giveaway?

CB: The first issue sets up the world and the majority of the major players. After that, the stakes are raised and the story just gets bigger and wilder. There are a few pages in the later issues that I think are just pants-wetting, awe-inspiring amazing. There’s a lot of action, but readers will also be able to really see these characters evolve and change, and we’ll also delve deeper into the history of this Old West that should have been.

BH: Yeah, the first arc of the series is pretty epic and sets up this world, and the possibilities for stories in this world, pretty fantastically. The book moves at a good pace and, like Cullen says, the stakes keep getting raised. This first arc definitely has it's share of high adventure while at the same time, setting up some pretty interesting characters and character dynamics. I've never had so much fun working on a title! 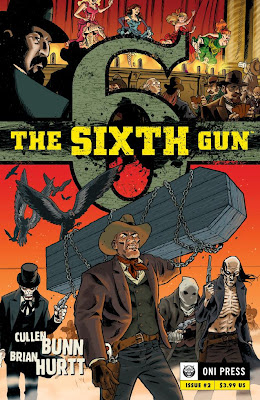 Anything you're reading right now you'd tell our readers to check out?

CB: I’ve really been enjoying SCALPED. That’s probably the book I look forward to most. I’ve recently been reading a lot of manga I overlooked in the past—PARASYTE, PLUTO, and MONSTER are all quite good, and UZUMAKI is just awesomely strange.

BH: SCALPED is also one of my favorite books and I recently read Jason Aaron's first arc on the PUNISHER Max series--that was fantastic. I also love Brubaker's CRIMINAL, and BPRD/HELLBOY and SCOTT PILGRIM. I've read about a third of PARASYTE and loved it but I've yet to get my hands on the rest. Normally, I don't read a lot of super-hero stuff but last week I read and enjoyed the collection of Millar and Hitch's FANTASTIC FOUR and I really liked it. And then, just yesterday, I finished the oversized collection of the first 19 issues of Matt Fraction's Iron Man--about the coolest take I've seen on Iron Man in decades. After that I just tend to pick up graphic novels that get my attention. I like a lot of First Seconds European reprints and I'm always keeping my eye open for some good manga.

On a 1 - 10 scale how nerdy is it to collect old issues of Jimmy Olsen?

CB: Jimmy Olsen, huh? That’s pretty nerdy, maybe a 7 or 8. But I think those old stories were a lot of fun. There’s a certain wonder in comics of that era that I worry a lot of modern books might miss. We all geek out over something, right?

BH: That's at least an 8 on the nerd scale but I'm also not one to think that that's a bad thing! I mean, I watch Doctor Who and Buffy--who am I to criticize?

The Signal Watch would very much like to thank Cullen, Brian, Oni Press and Austin Books for this great opportunity!

FCBD in May 1, 2010. THE SIXTH GUN is one of the options (maybe the coolest option?) you'll have at your local comic shop.