"Night Nurse" at The Ritz

On Sunday, May 2nd, I'm headed down to The Ritz on 6th in Austin for a screening of "Night Nurse", a pre-code film starring a young Barbara Stanwyck. I know Stanwyck primarily from photos and "Christmas in Connecticut" (I admit to having never seen "Double Indemnity", of which I am a bit ashamed), but she's one of the classic screen sirens, and this flick came out during one of those periods that happens in Hollywood when things seem to be really cooking.

"Pre-Code" refers to the "Hays Code" that Hollywood self-imposed in order to avoid any official regulation after the moving pictures began to take heat from moral watchdog groups like The Catholic League. While a lot of what was considered risque then would make the average 2010 episode of CSI look like hard-core pornography, the public became concerned that movies were including material about promiscuity, drinking, drug use, etc... And it would still be decades before anyone thought about an actual ratings system. 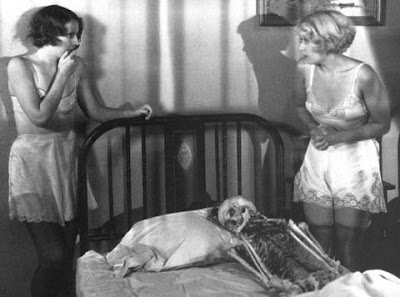 no idea what's happening here, but it looks pretty awesome

Anyway, we can thank "Night Nurse" for helping anyone dream up the Hays Code, so I'll be honest when I say I'm a bit curious about what's in this thing. Plus, you know, Stanwyck.

There will be discussion before and after the movie by film historian, Kim Morgan.

Cinema Club is an interactive new series that highlights the sophisticated appreciation and discussion of classic films from cinema history. At each screening a prominent film historian will introduce an essential film classic. Following the film, the speaker and members of our programming team will lead a discussion of the film, offering insight into the film's production, history, and artistic qualities. This is a venue for film appreciation, to discover or revisit the outstanding achievements of yesterday. Each screening will be accompanied by program notes written by our on-staff film historians. This is your premiere opportunity to relax and bask in the glorious silver screen.

Pretty bummed I'm going to have to miss this one...I expect you to take good notes for me.