I will be blunt: It's my belief that DC made a mistake when they let Judd Winick bring Jason Todd back from the grave (leaving others to explain how it happened). I continue to feel that it was a mistake and that Jason Todd worked great as a Robin, and what his death meant in the ongoing Batman comics was infinitely more interesting and palpable than his return as The Red Hood.

Whatever short term gains DC earned in sales, it not only lost reader trust of guys like me who were kids when Robin got blowed up good, and had become quite used to the idea of Batman and his dimly lit cylinder he kept in the batcave, keeping Jason's costume as a reminder and tribute.

All of the "I liked it better my way" reasoning aside, the return of Jason Todd was a seriously shoddy bit of story-telling that never did get properly wrapped up, leaving DC to wrestle with the fact that this guy was running around in their mega-narrative with no defined character or agenda. 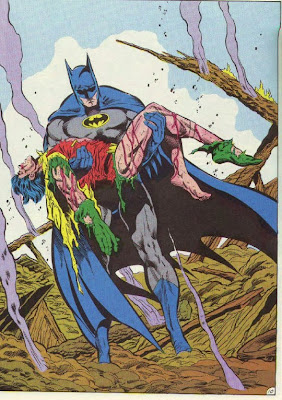 Readers like myself might hope DC would right the Todd-related missteps via the Johns-proven method of in-narrative course correction. (Perhaps Hugo Strange cloned Todd and it was never actually him? It doesn't matter, so long as the character wound up safely back under 6 feet of fictional dirt.) But it doesn't seem to be the case that DC could leave well enough alone, or admit that maybe this whole Jason Todd thing just wasn't working. And, really, the recent Blackest Night storyline served as DC's mea culpa regarding the "revolving door of death" in superhero comics, indicating that DC editorial was at least a little bit ashamed of their policy on the big sleep. And yet, Jason Todd really didn't come into play.

Of the many, many writers to tackle Jason Todd since his return, I've only enjoyed Grant Morrison's take, and the logical face-off between Dick Grayson (aka: the original Robin and current substitute Batman), and Jason Todd as The Red Hood. But that had far more to do with Damian getting mixed up in the whole mess (and, yes, I like Damian far more than I ever liked Tim Drake).

At any rate, it seems as if I'm to continue reading Batman, Detective and Batman and Robin, I can expect to see Jason Todd keep popping up.

DC Animation has a film coming, written by Winick, who seems dead set on making sure his mostly-reader-panned run on Batman leaves an indelible mark on Bat-lore.

I'm not averse to saying that Batman comics can get a little stale, cycling through the same set of villains, most of whom were introduced early on in Batman's publishing history. And some things work, and some things don't. And usually these things have a way of sorting themselves out. But somehow it seems DC is oddly invested in making this idea work, mistaking any reaction from the fanbase as emotional investment.

Watching the trailer, you can almost get why DC bought into the idea. An equal number for Batman. A guy who knows which drawer he keeps his cufflinks in, and what punch he'll throw first. Hush was the beta-version (and sort of nonsensical first draft) of the concept. But so was Bane. And Hugo Strange. Todd, on the other hand, had lived in the mansion and could be a story of Batman's failure.

But for longtime readers, it just feels cheap. And a bit of a cheat.

I'm not clear on why DC feels this is the right thing to do, but there you have it.

Update: Curiously, Daily DCU discusses the same item today, and I'm 99.9% certain they aren't reading this site. Apparently they'd posted on the topic before (I missed that post) and have been taking some heat from what the author assumes to be younger readers.

Not having that empty Robin costume hang in the cave any longer took away something for me. Jason Todd may still be Batman’s failure, but he’s no longer his greatest failure.

Email ThisBlogThis!Share to TwitterShare to FacebookShare to Pinterest
Labels: batman

Sometimes I think that I wish I had kept up with comics so that I had the almost encyclopaedic knowledge fans like you have...but then stories like this make me realize that I wouldn't want to be cheated by someone thinking 'outside' the box (or grave, as it may be).

What did you think about the Batman villain Onomatopoeia that Kevin Smith created?

I haven't read any of Smith's Batman work. Honestly, I am not a huge Smith fan, so its not a big selling point. Add that with the sort of c+ work he did on Daredevil and Green Arrow (the stuff he did that I actually read) and I haven't been terribly excited to pick up his Bat-work, either.

I pick up a LOT of comics every month, so I need to sort of filter some of what I'm getting, especially when it comes to an area like Batman where you could find yourself picking up a dozen books a month tied to Batman alone. So I tend to avoid mini-series unless I hear they're just exemplary.

I just checked Wikipedia...and the villain in question was created in Green Arrow http://en.wikipedia.org/wiki/Onomatopoeia_%28comics%29

Yeah, it seems like a cool idea! I just didn't ever get around to reading the series.

By the way, this weekend is a great opportunity to go check out those comics. Its Free Comic Book Day at Austin Books on Lamar. The Smith Batman books won't be free (or even discounted), but there will be a whole bunch of free books to pick from.

The big mistake has always been, and always will be, giving Judd Winick a writing credit. DC should have kept him as an artist and he was never really good at that either. Lazy plotlines and terrible dialogue is much easier than drafting 24 pages of artwork.

Oh, that was me above.

I confess, I have never seen Judd Winick pull off a single comic I liked, including Barry Ween.

Why Todd over Drake? And what's Tim doing now-a-days

I'm not sure I follow your question. Do I prefer Jason Todd over Drake as Robin? Well, sort of. Tim Drake always felt a little squeaky clean after Jason Todd (Jason Todd may have straight up killed a guy).

Tim is in his own series called "Red Robin". I admit, I'm not reading it, but I guess the big payoff is that he's putting together the clues to prove Bruce Wayne is alive.