Ten years ago, on April 28, 2000, Jamie and I tied the knot in South Austin on the grounds at Green Pastures with many friends and family in attendance. 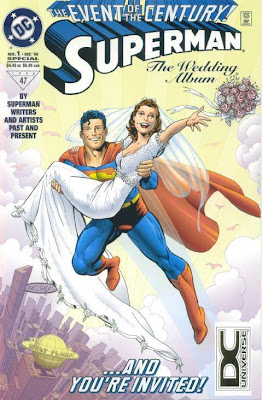 Jamie wrote a lovely post describing our courtship and the time leading up to our wedding at her own site (click to see pictures of a much younger and much thinner Signal Watch and Troubles). And here's a surprise post from Ransom at ChronSnob talking about what was going on in pop culture when we got hitched up!

It's amazing to realize how fast a decade can pass, and, of course, it doesn't hurt that I remember the day of the wedding pretty darn well, right up to getting a soap bubble in my eye as we ran out to the car. And Shoemaker's words ringing in my ears as we drove off: So long, Superman!

The wedding was very traditional. Steanso and The Dug stood for me, Peabo and a guy I've lost track of were ushers. Good friends Erica and Shannon were involved in helping Jamie and the wedding, and Heather and Rebecca looked lovely up there next to Jamie.

No futzing around on the vows for us. We figured that after 1000 years, somebody more or less got the words right to get the idea across, and we weren't going to try to build a better mousetrap. 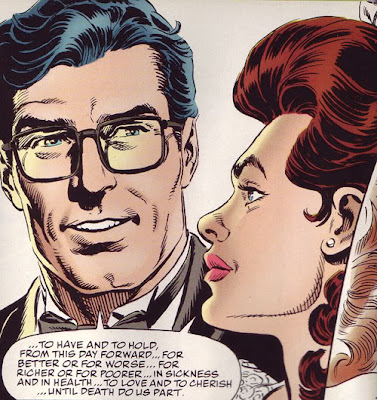 Our wedding song was "Satellite of Love". We had a carrot cake for the groom's cake (I still firmly believe carrot cake is a superior cake), and Jamie and I each got to do The Robot on the dance floor. Jamie's dress had an empire waist and was simple and elegant, and I wore generic tux #1 from the Al's Formal Wear rental selection.

We do have many beautiful, but not digital, pictures of the wedding. I'll let you use your imagination. Looking at the photos reminds me how overwhelming it was to realize all those folks were there just to see us get hitched. Its a deeply humbling moment.

After the wedding, we spent the evening at Austin's Driskill Hotel, where we found ourselves eating some prepared food packages in the bathroom at 1:00 AM (neither of us had much of an opportunity to get to the food at the reception). We had a beautiful corner suite and sat on the porch watching folks mill about Sixth Street.

In the morning we realized the very nice car that drove us to the Driskill would not be there, and so we spent half an hour calling around to find someone to take us home. Thanks to The Dug for the assist.

A bit of wedding apocrypha: The day of the wedding, I didn't have much to do. Somehow I wound up talking to some hobo'ing 20-somethings at a convenience store, and so I drove them around for a while, figuring it was good karma to get these guys to their next local destination. Nice kids.

Suffice it to say, its been a great ten years. Jamie isn't just my wife and co-wrangler of my pups; it may be cliche, but in every sense of the word, she's my best friend. I never lose sight of how great it is to come home to someone so amazingly smart and lovely, who is witty as Kate Hepburn at her best, who shares my likes and loves, and who doesn't hesitate to have her own passions and her own way of doing things. She keeps me honest, and she manages to do it without slugging me in the eye, which is no mean feat.

We were never going to have the traditional life, or the traditional goals between the pair of us, but we've been making it work for ten married years and more than four before that.

And I still learn something new from Jamie every day. And from my own partner, I've learned what true courage and true strength look like. I'm a little bit in awe of her, truth to be told.

Happy Tenth Anniversary, Jamie. I love you. Here's to a million more. 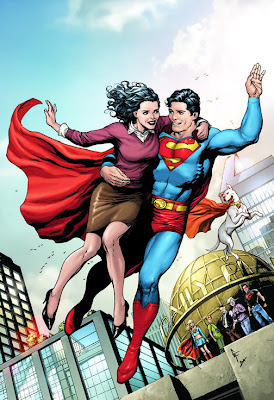 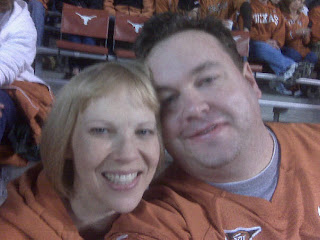 you have to have some common interests. all wise people can agree on the greatness of the longhorn football program. 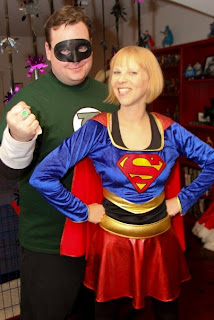 and you people think its just me... 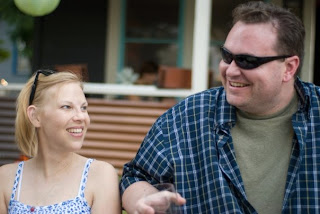 It's so nice to see other people who end up with their college sweethearts. Ms. Menos and I met in a class our freshmen year. I always feel oddly clueless talking to my single buddies about the scene, since I never experienced it. Oddly clueless, but I sure wouldn't trade it given the stories...

And I know your last question was rhetorical, but yeah, she's stunning.

When single friends talk about their romantic troubles, I sincerely feel the same way I do when software developers starting talking about code. I sort of get it, but...

Congrats! Thanks for bringing Jamie into the family!

Why are you making my eyes get all watery?

Congrats to the nicest couple that I've never actually met! And yes, carrot cake is an amazing cake.

Congrats! Here's to another blissful 10-years.

Hear, hear! I couldn't find a better brother-in-law than Ryan... unless he had like a billion dollars. No, then he'd probably be a douche. Yay Ryan and Jamie!