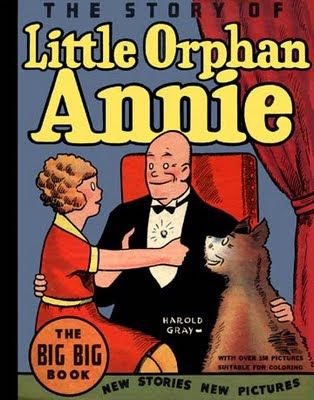 Man, this is absolutely no good.

If you're looking for an indication of the sorts of things we're losing to a mix of the demise of print, changing cultural practices and what happens when you continue creating new and shinier franchises... The Chicago Tribune syndicate is canceling the 85-year-running strip "Little Orphan Annie".

Since learning about Tintin while in middle school, I always sort of felt that Annie was America's Tintin. A globetrotting adventurer, getting into all sorts of scrapes that were a bit out of a kid's depth, and often had quite a grand scale to the adventure. 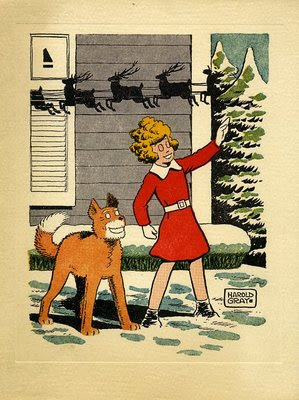 Unlike Europe, America doesn't do quite as much to pass down characters from one generation to another, and certainly hasn't embraced comics as a medium in the same way. Of course, Tintin lived in graphic novels, while Little Orphan Annie existed in newspaper strips and collections of that strip.

However, most Americans now associate Annie with spunky Aileen Quinn and Albert Finney as Daddy Warbucks (yes, war profiteer as hero). The movie is a bit of an American kid's classic, and was based upon a long-running stage play that has since become a staple of school and community theaters around the world. (As a kid, Sarah Jessica Parker played Annie in the Broadway version). I've seen the movie, likely, a dozen times since the theatrical release.

The strip always retained its tone of adventure, and its classic, post-Barney Google/ built in the 20's-look, compete with Annie's pupil-less eyes. At least the last time I saw the strip presented as new episodes in the paper, which was back in high school. 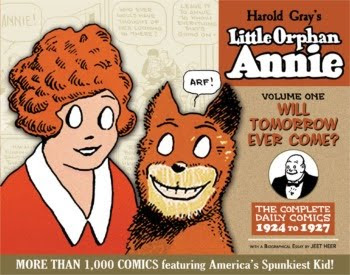 I think Sandy got into the catnip

Mostly, I'm sad to see a cultural touchstone closing up shop. Annie is a character that has been a common point of reference for Americans for 85 years. It's not a total surprise that 10 years past the 20th Century, we're beginning to say good-bye to the last party guests. 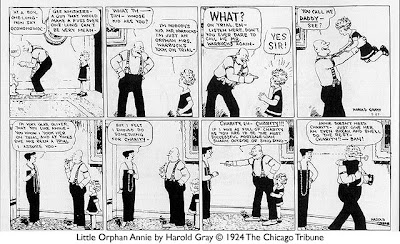 one of the first Annie strips

For the next fifty or so years, there will be those who grew up with Annie, and work to maintain memory of the characters, but at some point, Little Orphan Annie will be a museum piece that some grad student will puzzle over as they work on their dissertation on secret decoder rings and what "Drink Your Ovaltine" really means. 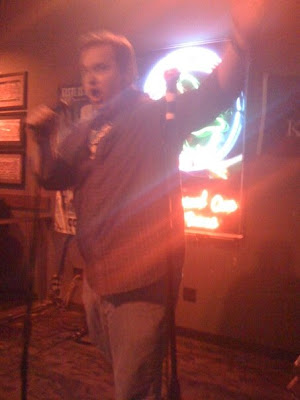 Your faithful blogger wows the crowd at Common Interest Karaoke with "Tomorrow" from the stage show "Annie". No, seriously. That is exactly what is going on in this picture.

As long as there are kids who want to believe adventure is around any corner, and that partnering with your dog, and guys named "Punjab" and "The Asp" is a good idea (and that a billionaire will decide you're keen and take you around the world), I think there's a place for Annie and her soulless, white eyes.