So long to Frank Frazetta, one of the most well known and possibly one of the most influential artists and illustrators of the 20th and 21st Centuries (depending on who you're talking to). 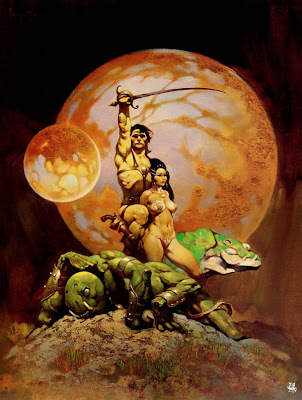 I kid a lot about Frazetta, partially because growing up in Austin, I came to associate his work with the wall art at Conan's Pizza and eating a metric ton of cheese and meat. Also, seriously, those women were incredible, and you're not supposed to say that out loud. And, of course, the material was fantastical and just plain over the top.

You don't crack the art world by painting non-ironic images of sorceresses, giant panthers and barbarians. But in the end, mass production meant we'd all see his stuff eventually.

In his world, Frazetta was a master of his craft. He carried forward the art of the painted pulp cover and movie poster and turned those covers into iconic images that anyone living in the past 30 years has seen somewhere, and likely knows the art is by one guy, even if they can't remember his name.

Too many comic and illustrative artists can't tell a story with a single image, but that was never Frazetta's problem. Looking at any single Frazetta picture, you really do wonder what, exactly, is going on there, while having a sense that there's worlds within worlds behind that image. It was the perfect compliment to everything from a Molly Hatchet album to catching the eye for John Carter of Mars novels.

He did comics, by the way. Lil' Abner, The Shining Knight, Buck Rogers... the man was incredibly prolific. 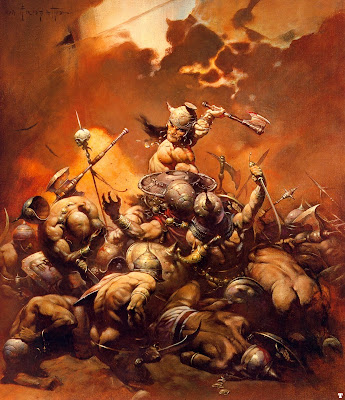 Conan. @#$%, yeah. If you want to get this painted on the hood of your car, you are not alone.

As a guy who likes to draw (but drew teh short straw when it came to talent), Frazetta is the kind of artist who would make me just weep onto my drawing table. His anatomy, while superhuman, was always spot on, even with imaginary beasts and creatures. He had terrific control of light and shadow, and while the images were almost always overtly provocative, you couldn't help but respect the guy's handiwork.

I won't give a biography. You can find great run downs elsewhere.

It probably wasn't until I was in my mid-20's, though, before I really grew to appreciate his work. Til then, it had been so omnipresent and imitated, and I took pulp art for granted, that I didn't really take time to appreciate the guy.

Well, so long, Frank. You left behind one hell of an awesome legacy. 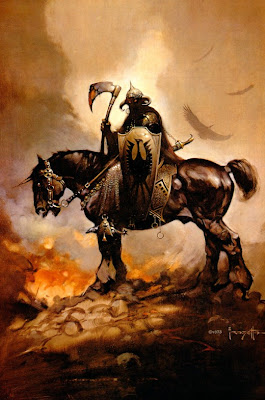 Email ThisBlogThis!Share to TwitterShare to FacebookShare to Pinterest
Labels: creators

Kudos to Frazetta, but you're totally selling yourself short on your drawing ability.