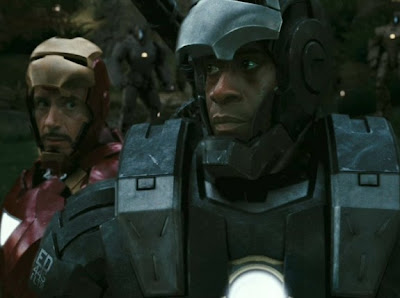 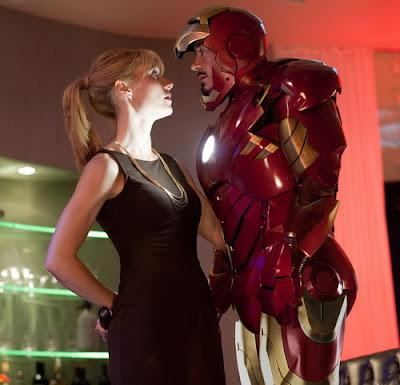 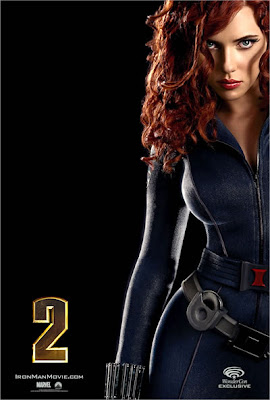 The only hole that bugged me:

Why did Mickey Rourke's character fake how useless the robots were. I mean, the audience couldn't have believed it, and if he hadn't lied he would have had front-row seats to take over the drones, instead of having to kill the guards, hack in manually, etc.

That aside, I thought it was a perfectly watchable movie (I just got back 5 mins ago). I like the actors, the characterizations, and I liked that it wasn't wall to wall fight scenes.

Did you stay till after the credits?

I've not yet seen it. I suspect that it, like the original one before it, is a renter, at least for me. Downey did himself no favors in my book for perpetrating the Sherlock Holmes flick, so I see no reason to rush out to the theatres to see this one. Oh, well.

Is that really a valid criticism? Holding up a subpar but totally unrelated movie that the lead actor appeared in as a reason not to see this movie? If that's the standard, then you're not going to be able to see many movies. Most of Hollywood's top tier actors have appeared in some crappy movies at one point or another. Anyway, not to be too hard on Ransom, but this just seems sort of representative of the sort of criticism Iron Man 2 has been getting- people who already were more or less against the idea of the movie before seeing it (because of the basic premise or the actors in it or whatever), and then offering kind of weird rationalizations for disliking it. I didn't think the movie was flawless, but at the same time it would definitely have a good shot at making it within my top ten superhero movies.

I, too, disliked Sherlock Holmes, and I'd put it differently than Jason and say one had little to do with the other in my book.

I didn't want to dwell on it in the post, but I had a friend on Facebook quote criticism to me, and the things the guy was criticizing weren't really "wrong". Weird stuff like "why are characters having two conversations?" I might be missing something the kids expect out of narrative economy in their films, but it certainly had the feel that the reviewer didn't like the movie and was just looking for stuff not to like. I've seen complaints that certain characters "didn't have enough to do" that made me believe the character would just be standing around in the background, when that clearly wasn't what was happening.

Oh, sophomore efforts. Nobody loves you.

I know, I hope Ransom didn't take offense, but since we all seem to be making a national pasttime out of being critics now (myself included), it seems like we're way past the point where it's fair to start taking a logical, analytical look at some of these critiques and to start criticizing some of the criticism.

Yeah, ever since that Marlon Brando guy appeared in "Island of Dr. Murrow" I just haven't been able to bring myself to see "The Godfather". I hear it's good, but a guy's just gotta have standards.

Oh and word verification: "fabless", which I take to mean either totally lacking fab, or the plural of my favorite Vertigo ongoing...

My, my, you gentlemen are itching for a fight over popular culture. Allow me to retort, as I would hate for my silence to leave the impression that I agree with your assessment that my decision not to see the film at the theatres is "invalid." These days, going to the cinema is such an enterprise. It's a costly hassle, and it is coupled with all sorts of modern day annoyances: boorish viewers talking on their phones during the film, children running up and down the aisles with those shoes that glow in the dark, projectionist problems, et cetera. If I'm to actually trek to the theatre to see a big budget action flick, I want to make certain I will enjoy it in spite of those aforementioned issues. I did not enjoy Sherlock Holmes, and I have heard that Iron Man II was not as good as its predecessor. That alone, as I indicated, means that for me it is a renter. I just don't believe that for me it is worth the full cinema going experience. Is that somehow objectively wrong or invalid? I'll certainly watch it sometime in the next six months. That's all I meant to say, though I appreciate all the hyperbole in response! ;)

I'm not sure Downey Jr. falls into the "Tom Cruise" category for me, but I also have policies regarding avoiding certain actors (while no real policy on going to see a movie because a certain actor is in it). But as in the "Tom Cruise" example, I have to see a pattern of movies ruined by the actor and not by the direction or script.

if anyone can appreciate the rough road of attending a movie these days, its me. I encourage this as a renter.

For me, a renter it will be. (Of course, these days, almost everything is a renter.).

It's not a perfect movie by any stretch of the imagination but I really enjoyed it. I think that the first movie was superior to the second but I didn't feel like I wasted my money buy watching it in the theater. Plus, any excuse to eat pop corn.