From time to time, folks will ask me what comics they should read in order to get to know Superman. That's a tough question as Superman has such a lengthy, undeniably contiguous history since the first issue of Action Comics, that despite the fact we all know about Superman, the origin stories are now mostly either outdated, out of continuity, tied to a continuity (see the recent "Secret Origins") or possibly a bit tough to crack.

In Summer 2010, DC will release an original graphic novel entitled "Superman: Earth One", written by J. Michael Straczynski and drawn by Shane Davis. The story supposes that Superman is appearing for the first time in the modern age, with much of his standard cast, the Daily Planet, etc... but everything else is new and fresh.

If you're curious about the early days of Superman (not Smallville, but SUPERMAN), this book may be your magic bullet. As a contained graphic novel, I sincerely hope that the book gets some traction in the book market. If nothing else, Superman's origin story is now a slice of Americana, but continually renewable.

This week Newsarama posted some pencils by artist Shane Davis, along with an interview. I like it. Lois, Jimmy, and Shane Davis's stellar linework on a very Routh-ish Superman. 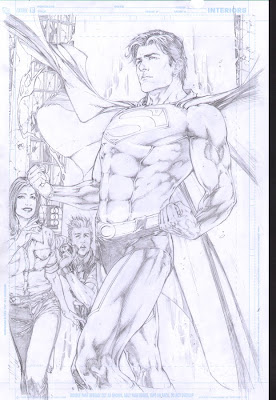