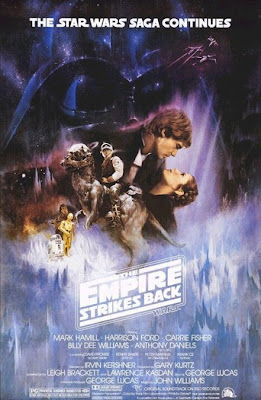 ChronSnob reminds me its been 30 years since the release of Empire Strikes Back.

Arguably the best of the 6 Star Wars movies and the best 2 hours or so of the infinite amount of Star Wars expanded universe stuff out there, the movie was released, apparently, shortly after I turned 5.

I do remember seeing this movie in the theater. I'd seen Star Wars at least twice prior, had the figures, the wall paper, the bed spread, the storybooks, etc... Star Wars was very much a part of my daily life. It was also the first movie I'd seen that was set up for a sequel, and on an oddly positive note for a movie where a hero had just been frozen and sold, another dismembered and where Billy Dee Williams had just lost his job.

It also featured Princess Leia at her most fetching in her snow bunny suit, trading barbs with Han Solo in the guts of a worm. If my expectations of how I might meet the right girl were a bit off, there's one more thing you can blame on Lucas. 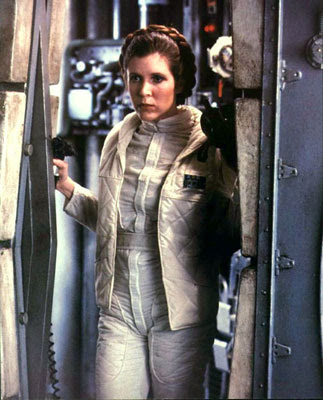 Oh, to be trapped in the belly of a terrifying giant space worm with Princess Leia...

I am not as hard on Lucas for Return of the Jedi as my colleagues. As a 2nd grader, I really liked the Ewoks, but even then I knew that Empire was somehow the better movie, and certainly the one most concerned with character. Not to mention the set pieces were just cooler, from Hoth to Dagobah to Bespin. And somehow, at age 5, the lightsaber battle on the weather vane, Luke's rescue and the escape of our heroes seemed positively transcendent when I first saw the movie. It was one hell of a ride.

At this point, I have no idea how many dozen times I've seen Empire (as we cool kids called it), but like all of my generation, I raise a toast to the mightiest of all the Star Wars films, and to all the awesome toys it brought to my toybox when I was 5.

I totally had the probe droid playset with ion cannon, the wampa and my own tauntaun. The action figure of Leia never did her justice.
Posted by The League at 5/21/2010 12:12:00 AM

Yeah, people get down on those Ewoks, but I still liked a bunch of the scenes from the Jabba the Hutt stuff in the first reel of that movie. When it comes down to the best villains to ever grace a movie screen, I still rank Jabba the Hutt way up there.

ESB is easily the best of all 6 of the Star Wars movies and as you said spawned the absolute best in toys. Ah, I remember the snow speeder vs AT-AT battles of childhood so well. I also remember my cousin saying, "How do you put someone in the gunner seat?" while ripping the back off the snow speeder. Dad immediately stepped in with some Crazy Glue (tm) to save the day. Ah, memories...

For those of old enough to have seen it in the theaters, realizing you'd have to wait a few years to see Han get un-carbonited was pretty amazing.

The cinematography and set design are pretty outstanding. I don't think any of the other films look quite like it. Attack of the Clones comes pretty close, which, too, features a fetching white suit worn by the heroine.

Empire is easily one of the better sci-fi films committed to film.

My AT-ST stands on a shelf in my office.

Yeah, our Dad threw a lot of Yoda quotes at us for many years after Empire came out. Definitely has some of the best writing of the three movies.

Sadly, I sold my AT-AT in the purge when we moved from Phoenix to Austin. That was a second edition, 90's era AT-AT. Jason had owned an original, as well as a Rebel Hoth Base and snowspeeder. I had the items listed above, as well as the Dagobah playset, dual-pod cloud car, and X-Wing with Dagobah damage.