Well, when the first trailer hit, I got a few queries from Leaguers asking if I was psyched for the release of the upcoming movie Scott Pilgrim vs. The World.

You may see the trailer here (until it is ganked):

A few years back I picked up the Scott Pilgrim comics for Jamie, and she liked them, so when I heard a movie was being released, I figured "I should probably see what the buzz is about". On the comics internets, Scott Pilgrim is an incredibly popular commodity. People love Scott Pilgrim, and my hat is off to Bryan Lee O'Malley for quietly creating a minor phenomenon.

To be truthful: This is one of those things, I realized about fifteen pages in, that is not aimed at me.

The art is a sort of post-manga-influence-on-North-America, employing some of the manga stylistic shorthand, etc... But O'Malley's characters are a bit Smurf-like, in that I had sort of a hard time telling which character was which whenever the scenes shifted and I had to figure out which character was which all over again (and the story is rife with crowd scenes). I don't need illustrative art, but I don't want to have to work to identify the characters in every panel. 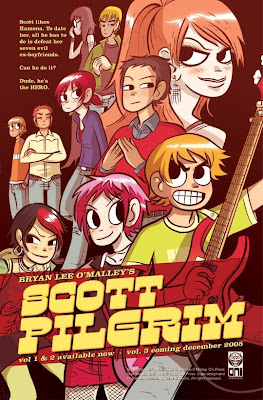 the comics themselves are b&w, so it makes it a bit more of a chore.

I can't say who the book is aimed at, but I know its not likely me. I didn't find his titular character's foibles particularly amusing or adorable, and I was never clear on why I was supposed to give a @#$% about Ramona and why she's supposedly worth all the trouble. In fact, the story sort of suggests that she isn't worth it (to my reading), but Scott isn't quite clever enough to figure that out.

The comic does have a lot of clever stuff, and a lot of it will surely be visual candy to the filmmakers. I also think a seasoned screen writer stands a chance to more clearly make arguments for our protagonists that the comics fail to make.

We'll see what changes are made, and if director has managed to punch up what felt occasionally clunky or senseless in the comics (and, no, I am not talking about the wacky video game references). I have faith that Michael Cera will improve on O'Malley's character by roughly 200%, or at least not make me want to bop him over the head quite so much.

And, honestly, I was having some issues with the concept of "ownership" of Ramona, and how, while fairly clever, it all seemed sort of written from a kind of oddly unself-aware and immature perspective, even when trying to make the case that the quest for Ramona was sort of the quest to find romantic maturity. Or something. I don't know. The final volume hasn't been released quite yet.

Mostly, I'm both surprised and not that surprised that this series has been so heavily championed online. Its definitely got its clever bits, but I suspect yours truly would likely be cast as one of the villains (not an evil ex-Boyfriend) of the book.
Posted by The League at 6/08/2010 10:32:00 PM

the fact that its Wright directing means this movie stands a 350% chance of being better than the source material.

As it has been mentioned the fact that Edgar Wright is directing it makes it 110% awesome. Shawn of the Dead, Hot Fuzz need I say more?

I do love Scott Pilgrim. The reasons are many and varied. First Bryan Lee O'Malley is a Canadian and most of the action takes place in Toronto which is a city that I've never lived in but I'm acutely aware of.

Your comment on the art is fair. It is certainly not for everyone. To me it looks like a combination of manga and an 8-bit video game. I also think that his art has improved as the subsequent volumes have been released.

Personally, I love all the video game references as I'm part of that generation that got to experience the Atari, Intellivision, Coleco, Sega Genesis, Nintento consoles.

My next comments may contain spoilers for people who have not read up to and including Volume 5.

To me the whole idea of Scott Pilgrim is his journey into maturity. I mean lets be serious Scott is a douche. He's not a good friend, employee or boy friend.

As the story progresses you can actually see Scott growing up and figuratively as well as literally getting a life. As such you can see his puppy dog infatuation with Ramona changing into something else. Also there is a dawning realization to Scott that maybe he should be with someone else in his group of friends.

I'm sure the movie won't touch on that last bit as the script was already in the can before book 6 of Scott Pilgrim was even written. Plus I don't think they'd have enough time in a 2 hour movie to develop that relationship in depth.

I guess I got that Scott was supposedly coming to some kind of maturity, but somehow the idea of having to fight ex-boyfriends as the central conceit of reaching that maturity seemed at odds with the point. It also didn't seem that Ramona ever really demonstrated why she was worth the effort, and as of the last volume I read (I guess Volume 5?), that still hadn't happened.

I guess I sort of call into question O'Malley's endpoint for maturity when it involves fighting boyfriends and (depending on how you look at it) Ramona as either object to be won or Ramona as flake who seemingly has no ability to define herself outside of her boyfriends.

I actually mostly really like the video game aspects, even though I wasn't much of an NES or Sega player.

I think you've hit the nail right on the head. Ramona is not worth it and fighting ex-boyfriends is totally immature. Maybe I'm a helpless romantic but I hope that Scott grows up and gets back together with Kim Pine before all is said and done.

One's appreciation of Scott Pilgrim varies in consequence to a person's background in anime, manga, growing up in the 80s and lots and lots of videogames.

Reading Scott Pilgrim and enjoying it is like watching a Quentin Tarantino film. Both are, essentially, mashups that riff off on previous works that highly influenced each creator. Not quite bursting with original characterization or plot but infused with an incredible energy and enthusiasm. If you were part of the 8 to 16 bit Nintendo generation, played way too much JPRGs and Street Fighter 2, worshiped Ninja Scroll and Neon Genesis Evangelion while listening to the Smiths and Black Flag, Scott Pilgrim hits that sweet spot of enjoyment. You get thrills out of recognizing particular references and cues wrapped around a heavy absurdist action comic.

It's certainly not Moonshadow or Watchmen, however. Your mileage will definitely vary.

Apparently @NTT had a window into my childhood. Don't forget Robotech as well!