edit: You can read Steanso's post on this same outing with pics of the stage w/ West and Troubles and myself in the balcony


So this afternoon I attended a screening of "Batman", the film made with the same cast, props, effects, etc... as the famous Adam West starring TV series. If you ever remember seeing Batman's BatBoat, or Bat Shark Repellent or Batman running around with a lit bomb, desperately looking for a place to rid himself of the bomb (my favorite scene in the movie)... that's "Batman", or as some in the know call it "Batman 1966".

I grew up on Batman. I talked a bit about my history with the character way, way back in 2005 at the release of "Batman Begins".

Family lore has it that Mr. West's version of Batman aired in syndication each evening around dinner time, and as I was a restless baby, The Karebear figured out that this was the only thing I'd sit for while she tried to cook up some dinner. Further, the family lore states, my first word was "Batman". And, hell, it may be my last. And it's no less likely I'll be running around in a cape and diaper singing the theme song to Batman then.

Our Signal Corps Cinema Event was attended by myself, Troubles, Steanso, Julia P. and her beau, Bill B.

Adam West, Himself, was in attendance. The first thing you need to know about Adam West is that he is COOL. Like, Joe Cool-cool. He had on what looked to be a linen suit, he's still got that voice, and he seems to genuinely love that he gets to meet his fans. He's very witty, and he appreciates that folks appreciate his work.

I have no idea how many seats are at Austin's Paramount Theater, but its hundreds and hundreds, and the place seemed to be 95% sold out. Not bad for a movie that debuted in 1966, at that very same theater with all of the stars in attendance (Mr. West told a story that Burgess Meredith had his wife fly him in in her own plane so he upstaged their airport press conference).

The theater was full of all ages, from four years old to the elderly and everywhere in between. Austin Books made an appearance and showed up with a table full of Batman memorabilia and merchandise. Further, as the screening was part of Austin's bat-celebrating "Night of the Bat", Bat Conservation International was there with our local friends, the Mexican Freetailed Bat (it's a tiny, adorable bat that eats our local bugs) and an African fruit bat of some sort (that was inverted, very large and very, very cute).

Mr. West is philosophical about his role in the weird, wacky pop culture world around the character and icon of Batman. He seems to understand that Batman is bigger than anyone, or even any one concept of Batman and talked about how he thought the new movies were cool, but that was the Dark Knight. He was very happy being recognized as The Bright Knight, and I think that was a very popular sentiment with the crowd.

My preferred seats at the Paramount are in the balcony, so I did not get anywhere close to Mr. West, which is too bad. But the film print they had was awesome, the sound was better than I remember from the last time I was there, and the crowd was very, very into the movie (including the kids!).

Outside of the theater, I stumbled upon an amazing sight: 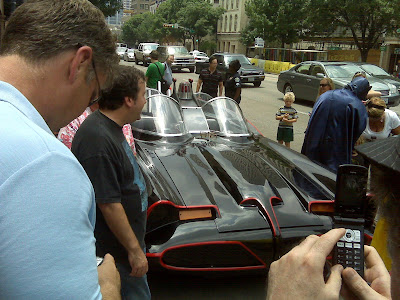 In my collection, I have roughly 35 Batmobile toys. 3 of them are this car. 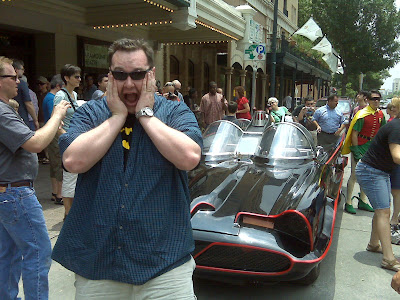 I was, needless to say, delighted.

As a quick note: I am a Batman fan. I am crazy for Superman, but there's no doubting my Bat-fandom. But I honestly think I'm as much a fan of the Batmobile and its many crazy different incarnations as I am of, say, Robin. Or Alfred. Anyway, its weird to be a fan of a fictional car, but it all started with the TV show Batmobile, so seeing the car up close (yes, it was a reproduction, but a stellar reproduction) was sort of a thing for me. 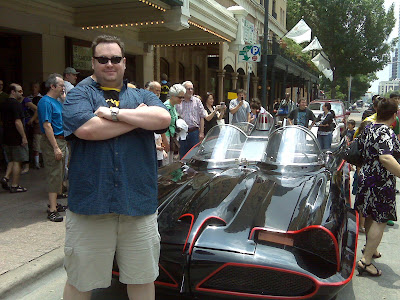 I got off my posed shot. Pretty sharp. 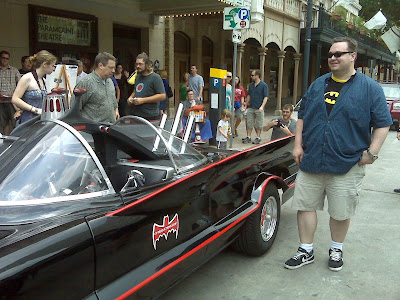 But then I noticed that Batman had wandered off... 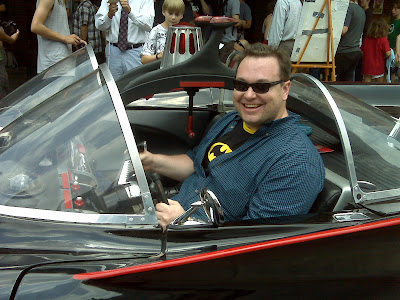 I only drove it around the block, like, three times (not really) 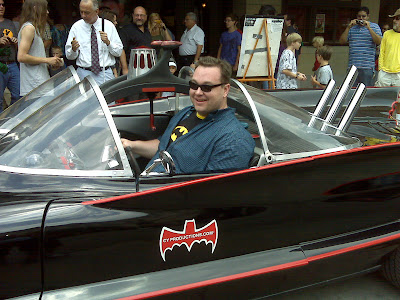 I must be a good 5 inches taller than anyone they ever expected to drive that car. 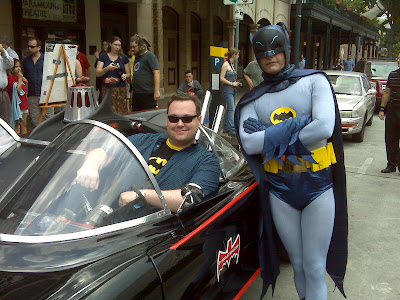 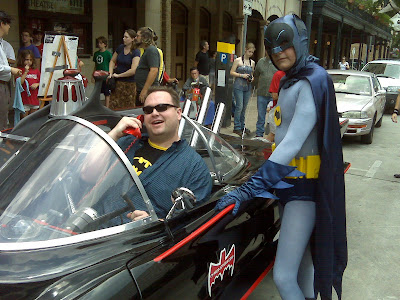 Why, yes, Catwoman. I will swing by and take you out for a lovely dinner of Fancy Feast and dead mice.

The car was a reproduction created and charactered by Cy Productions. It was AMAZING.

Cool! In that last picture, it really looks like Batman is starting to worry, "This guy is really big. And he doesn't seem to want to get out of my car..."

The post kept getting better and better (and I got more jealous with each sentence).

I grew up on reruns of the tv show as a kid, and I have very fond memories watching it with my family as well. The movie was a staple of our New Years Eve Movie Marathons for many many years.

When I was babysitting my 5 year old cousin while home on break from college I finally snapped after 1 too many episodes of Barney and discovered a Batmarathon on Nick. I convinced him that Batman was the best thing ever. His parents thanked me.

Seeing the movie in a theater... Awesome. Seeing the Batmobile? More awesome! Sitting in the Batmobile harassing Batman with the photos to prove it? Epic.

Glad you enjoyed it! It was a fun, fun day and I was very happy to get those pictures up.

Alas, while the TV distribution rights are there, there are no DVD rights available for the TV show itself (although the movie is available). Its a pretty sad situation.

West's Batman is great, as the kids really do seem to love the bright superheroics, and adults get all the wackiness. Plus, yeah, Batman's toys are truly awesome.As is Lee Meriweather in a Catwoman suit.

Glad you got to share Batman with a kid! Next up, find him some episodes of "Batman: The Brave and the Bold".

I'm sure he's already seen it. He's just about finished with high school at this point.

And thank goodness for the internet where if you look hard enough you just might find every episode of the show!