On Wednesday, June 23rd, you can head to the local comic shop and pick up issue #700 of Superman. Superman, the character, didn't first appear in this comic. He was one of several features in the aptly named Action Comics #1. But within a very short period of time, National Periodical Publications realized that if they were making that much money off of Action Comics and this Superman fellow, then they would make twice as much selling an additional comic book starring The Ace of Action. 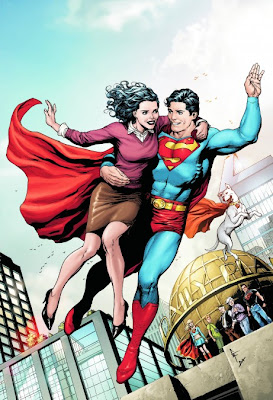 This would be the cover you're looking for

It's a phenomenal achievement for any series to hit 100 issues, let alone 7 times that number, but its that ability to not just endure, but remain interesting to older fans and create new fans that pushes Superman, Batman and Wonder Woman (all hitting milestone issues this summer) into icon status for comic fans and in popular culture.

I've been impressed that the new leadership at DC seems interested in doing more than paying lip service to Superman as a flagship character for the company. Not that long ago, the number of Superman comics released was shrinking, the interest in the supporting cast was on life support, and DC seemed entirely happy with the fan narrative regarding Superman, which seemed to spin out of Batman's statements regarding Superman in Dark Knight Returns (which... I think Miller always intended that as Batman's POV more than to discredit Superman). These days Superman is once again attracting top-level talent, and there should be a half-dozen Superman-related comics in print by the fall (I'd still like a "Metropolis" or "Superman Family" comic, but I won't be pushy. I'm getting my Jimmy Olsen back up feature.).

In celebration of the 700th issue, DC has more or less turned this week into "Superman Week" at their blog, The Source.

This Week Its all About Superman


Newsarama jumped in with:

And at Comic Book Resources:

And DC announces that writer Paul Cornell (taking over Action Comics) has signed an exclusive deal with DC Comics.
Posted by The League at 6/22/2010 05:55:00 PM