Once again Comic-Con is coming, and once again, I am not going. It's okay. It would be fun, but I'm thinking of getting my feet wet with a smaller con at some point next spring.*

Honestly, it seems like you can get a decent feel for the buzz from sitting back and occasionally checking the comics news websites and reading transcripts. Yes, there are fewer girls dressed as Power Girl or Wonder Woman at my home (Jamie will not comply), but at my home I am usually the only smelly fanboy shooting his mouth off about Jimmy Olsen and Streaky the Supercat, so that's a bit more tolerable.

I thought my folks were in San Diego on a business/ work trip at the same time as Comic-Con, but, alas, that hasn't panned out to be true. I wanted to see The Admiral show up at the convention center dressed as "El Turisto Magnifico". 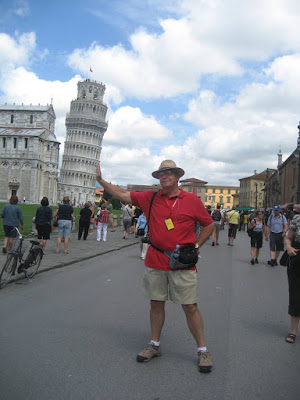 It's the fanny pack that grants him his super powers. The hat is just for show.

Unfortunately, they're arriving after the CosPlayers and nerds have scattered back to their respective mother's basements across the country. It's a shame, because nothing would have given me more pride than pics of the KareBear with The 501st.

This year should see some interesting announcements from DC as DC Comics is now DC Entertainment and actually a force within the WB film department for the first time. It's known DC has to put out a Superman movie before end of 2012 to keep some movie rights or some such, so I expect some words on that. Plus, GL is coming in 2011, as well as Batman 3, so I'd expect we'll see some info there. And its not crazy to believe we'll hear news on Flash and Wonder Woman. Plus, plenty of other new stuff and updates on projects we knew about, like Tron, Young Justice, etc...

And Helen Mirren will be there to talk about Red. That poor, poor woman.

Dark Horse Comics is sponsoring an event called #NotAtComicCon, basically giving an outlet and a license to nerd-out to those of us who don't go to San Diego once a year. The details are a little sketchy, but its nice to see someone online acknowledge that its a pretty small proportion of the fanbase that actually makes it to ComicCon.

You can also expect for standard news outlets to look to their hipster junior staff to do a story on ComicCon, not guessing that if their staff were inclined to support genuinely informed coverage of ComicCon, they would be AT ComicCon already or asking you for a pass, not to find a local angle. And, of course, the hipster interns who think Chris Ware is Jesus will get to write about how ComicCon is not where to find the good stuff (which is not entirely untrue, but its a little like championing croquet as an alternative on Superbowl weekend).

Anyhow, get ready for your pop culture outlets to be flooded with ComicCon info.