I am beginning to notice a curious thread when I discuss shows that I like, and that's "to describe the show would not do it justice, nor would it explain the appeal". 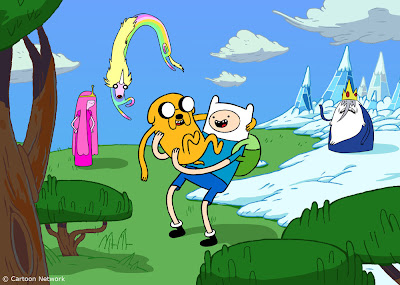 No, I do not know why Finn wears the hat with ears.

The show is about a kid named Finn who lives in a sort of all-purpose fantasy land with fairies, dragons, robots, talking mountains, burly men, penguins, etc... He's partnered with a talking dog named Jake who seems to be able to change shape and stretch. The pair often have to deal with an Ice King who really, really likes kidnapping princesses.

But, none of that is what makes the show entertaining. It's sort of the utter disregard for a straight narrative in each 10 minute chunk, or even a straight line of thought.