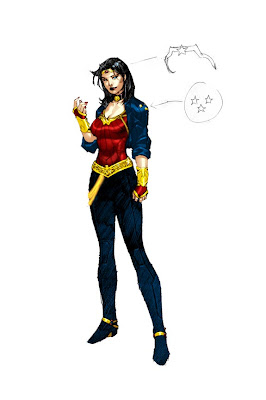 This week Wonder Woman will launch a new storyline, and, frankly, I think it sounds kind of interesting. It's a sort of alternate timeline thing, so Diana is getting a different costume.

Anyway, I don't love the new costume. It's... kinda 90's-ish (a jacket with the sleeves rolled up?). But I am looking forward to the story.

If they were going to think of something to actually put Wonder Woman in something more substantial than the classic swimsuit, I would think something a bit more Greek Armor-ish. But, you know, from what they're saying about the story, this isn't totally crazy. I just like WW in something a little more classic. Gimme some red boots, people.

edit update: DC is blowing some smoke about how this change is permanent, but... we'll see. I still think this is story related, and they can change back when they want.

Back in the 1970's, DC dropped her usual outfit for an Emma Peel (of the Brit spy show, The Avengers) style approach. They also stripped away her powers and turned her into a master of karate. 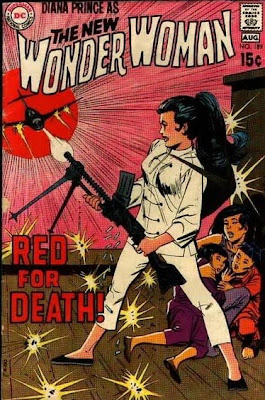 In some ways, seeing Diana Prince shooting down Reds in an airplane with a machine gun is totally awesome

The stories are kind of interesting, but its just not Wonder Woman. And its considered one of DC's most obvious missteps as a company. And they got called out by Gloria Steinem, herself, for the change. But beating up Lois Lane? Hilarious. Also, Superman is an insufferable jerk.

She's clearly got her powers and usual gadgets in the new design, which will keep some happy, but I'd expect this isn't the last word on the outfit. And certainly the new continuity introduced doesn't seem like a permanent change.
Posted by The League at 6/29/2010 10:23:00 PM

Well, it's at least more respectable.

Yeah, if I never saw Ed Benes draw Wonder Woman's shorts as almost a thong again, I would have been totally okay.

Well, it may not be great, but compared to some of her other outfits...

I'm mostly in shock that it's so totally from the Jim Lee circa 1993 playbook.

I'm guessing a few things (a) the story takes place when Diana is about 20. So, this could actually be period specific. (b) They have a different all-new outfit planned for the end of the storyline and don't want to blow it on a temporary look.

Its okay, but if you consider it next to Batman and Superman, its going to look a little funny used over the long haul.

It looks like she got a boob-job between this sketch, and the cover...

It looks way easier to fight crime in than her usual getup, but yeah, I'm not too crazy about the design either.

Well, DC announced that Jim Lee had designed the suit, so no mystery there. And everyone draws boobs a bit different. That cover is by Don Kramer, who is incredibly talented, but tends to draw his women needing a bit more, ahem, support.

If you want to point to what I think they were thinking: Marvel had a recent storyline in which Captain America was dead (it's comics), so his former teen sidekick put on a similar suit and took over as Cap.

You can see the difference here:
http://www.blogcdn.com/www.comicsalliance.com/media/2009/06/cap-costume-456.jpg

The new Wonder Woman outfit actually reminds me a bit more of a Marvel style outfit- or at least the sort of thing that the X-Men were wearing way back when I was still reading X-Men.

His X-Men. Note, in particular, his redesign for Rogue.

I'm not in love with the new costume but I don't hate it. I would have preferred a more ancient Greek/Roman costume with the skirt and armor as we've seen her wear in other books but I guess that is not to be.

What I am a bit confused/upset about is why they'd want to reboot her continuity. I don't care what they say there is no way this is going to be a permanent change.

Imagine all of the continuity problems it starts:

Oh this is going to screw things up royally.

Simon, I kind of suspect this is one of those sci-fi "we have to correct the timeline! Marty, we have to get you... BACK TO THE FUTURE!!!" sorts of things.

I very much hope it does something to get all of the Amazons on an island again.

Also, likely testing the waters for a change of costume that isn't this one.

I forgot to mention that I believe this is all a publicity stunt by DC. There is no way that this is going to be a permanent change. I feel that doing a costume re-design of a character that is 60 years old is one way to get the non comic media outlets interested. Then messing with the origin story will light the comic blog-o-sphere on fire.

So, I think DC is manipulating the media and generating publicity for Wonder Woman. Which in itself is not necessarily a bad thing but after I reflected on my knee-jerk reaction to the news I've decided not to rise to the bait.

Yup. But, again, it is story driven:
http://bit.ly/ba7WJk

I was only really looking forward to Don Kramer and more Don Kramer on art. Now, I'm actually kind of curious as to what JMS is up to.

Yeah, the Don Kramer art is something to look forward to but I'm still worried about the story itself. That particular line about "she sign's her work" fills me with groans.

If people want to read a hip updated Wonder Woman than they need to pick up Alan Moore's Promethe. To me that is the arch-type Wonder Woman done right.

I absolutely hate it. I don't mind changes at all to her costume. WW should be allowed to change it up anyway she wants. She should be a fashionista with old school and haute couture.

I hate that it looked like Jim Lee took all of ten minutes to draft that redesign. The leather street jacket, really??? Isn't 90's Superboy and the Lee/Silvestri Rogue costumes played out since 2004?? Please DC don't do it WW. Use some of that Warner Bros. money and the billions you made on Dark Knight to hire Adam Hughes and put him on the title. Thank you. Giving her a nice sword or battleaxe would help too. Jeez. I miss the Perez WW days. Alright, now I need to take some medication. Thanks alot DC.
-NTT

I strongly suspect that this is a publicity stunt that has gotten out of hand as WW goes through a jump start to reboot her origin and give her an altered version of her original costume.

JMS more or less confirmed the changes are temporary, btw.

I guess what I'm saying is that it has already worked. Look at the media attention it has garnered today. Now JMS says the changes are not necessarily permanent. So all the fan boys are now placated.

Once again I say, well played DC, well played. My Dan Didio is not as clueless as he lets on.

I think she needs some thigh utility pockets and bandoliers to complete the look. And nothing says street tough like a .44 Mag Desert Eagle cocked sideways. Add in a ceramic serrated broadsword and lots of shurikens. Yeah, that'll make her contemporary.