complete with "guy freaking out in the corner". 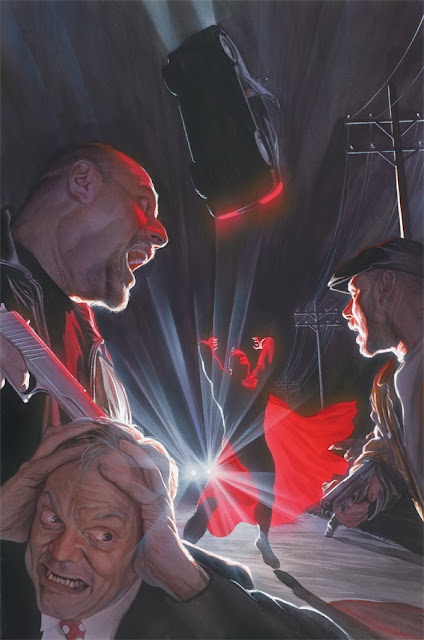 If you've been to my living room, you'll have seen prints by Alex Ross up on the walls and a framed copy of Superman #680 by the door.  I'm a fan of Mr. Ross' work.

While I enjoy the heck out of retold versions of the Superman story, there's something kind of astounding about Superman's appearance in Action Comics #1.  In 1938, some gangsters are kidnapping a reporter, driving crazy, basically just to throw their weight around, and suddenly their car is stopped by a man.  Stopped.  By.  A.  Man.

He tosses the car around, bullets do no harm, and he quickly dispatches the crooks and gently reassures the shaken reporter.

Its the sort of thing that puts the world on notice: from now on, everything is going to be different.

The reporter, of course, is Lois Lane: utterly fearless and already in trouble because she told a mob boss to take a hike when he made "romantic" overtures (she, of course, has no idea a Superman exists and would pull her fat out of the fire when she's getting in the mob boss's grill).

One of the things the comics have forgotten how to do is remind the reader of the wonder of a Man of Steel.  If the story is told from the perspective of Superman, then we forget that what's happening here is being told because its so unique and crazy in our world (there's a whole argument for why Clark Kent is important to Superman that fits in there).  And one of the things I like about the work of Ross is that his style puts these things into a context of a world where you can see how the world would be effected.  Ehen he drops his superheroes into the middle of a Rockwell-eqsue watercolor of the world, we can understand just what sort of feeling it would be to see a Superman chuck a sedan fifty feet into the air.

Provided our gunman isn't insane, we know he's doing some quick algebra in his head, because he's seeing something new and immense and serious and it is coming right for him (and killing that guy... its just going to provoke this thing all the more).

The phrase "adolescent power fantasy" gets thrown around a lot.  And that's fine.  Whatever gets people through the night.  It was the vision of two teenagers imagining a world in which a person has the power to not be cowed by the guns or brute force of those who would do harm to others, no matter their number, that gave way to Superman.  And the American ideal of the super-hero.  And I like the idea that if when we're blessed with the ability to help, we do so.

Also, I just like seeing Superman chuck a car and the guy freaking out in the corner.