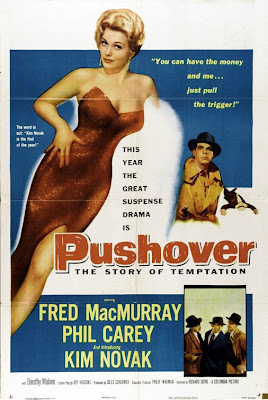 
You can make plans, but you can't plan for everyone around you, and so things go awry. The girl next door to Lona's birdcage is Ann Stewart*, a sweet natured nurse and exactly the kind of girl Code-Approved movies insist we're all cheering for.  Paul's partner, Rick (an impeccably coiffed Phillip Carey), has voyeur-fallen-in-love-with Ann.  So, anyway, when Ann stumbles onto the happenings, things get messy.

Oddly, this movie came out the same year as Rear Window, which has a very different plot, but both feature narratives hingeing on voyeurism and watching unsuspecting women across courtyards. I'd argue Rear Window is a better movie with a more interesting storyline, but it does make me wonder why two such similar movies were made at the same time.

Speaking of Hitch, I still remember watching a documentary on Psycho and the commentator talking about how interesting it is that in spite of all the spooky, awful stuff he does, you cheer for Norman Bates throughout the movie. And, similarly, despite the fact that Pushover is about two people losing their moral compass as they see a chance to have each other and a bundle of cash, and that today's viewers know the implications of Pushover being a Code-era movie, I did root for those two crazy kids even as MacMurray was putting a slug in a fellow cop.

Most of the flick takes place in the confines of Lona's apartment building, an interesting backdrop as you do get a feel for the building's layout, which is important to the plot.

I don't want to dwell too much on this one.  In today's world, this would be a plot in an hour-long cop drama.  What's most remarkable is really how great Novak is for what's really a first feature.  She seems ready to go as a leading lady right out of the package, and I think she couldn't have been older than 21 when the movie was shot.  MacMurray, of course, is good, but he doesn't have quite what he had to work with a decade prior in Double Indemnity.  Of course, its noir, so its yet another story of a guy throwing away a pretty solid, if ho-hum, life for the chance at what is coded for dynamite sex.

The titular Pushover of the movie is most likely supposed to mean MacMurray, who has been "pushed" to go "over" the line of duty.  I guess.  Sure, you could read it as "he's a pushover for this dame", but Novak's Lona isn't exactly a Stanwyck-esque femme fatale.  She grew up poor and is just dazzled by what's been offered to her in exchange for her attention.  But the interesting bit here is that of all the characters in the movie, the only solid crook of the story is only on screen for a minute or two.  There's a lot of moral ambiguity to how's and why's of everyone's motivations, including cop-gone-bad Paul Sheridan, and in that, it's an interesting movie (and you have to even question Rick, the handsome-cop of the film who is creepily watching the cute nurse through her window...).

Anyhow, its fairly light stuff, but its a fun movie, too.