Noir Watch: The First issue of Brubaker's "Criminal: Last of the Innocent" is great comics

Confession time:  As weird as it might seem, somehow I didn't get past the second issue of Brubaker's creator-owned series, Criminal.  I don't even remember what happened, because I don't recall having ill-feelings toward the series.  I suspect that I always planned to pick it up in TPB, and then just... didn't.  Likely because its being published by Marvel, and I don't really scour the Marvel solicits too hard these days (oddly, my Marvel purchases are limited to only a few things, including Brubaker's Captain America, so its not like I've had an embargo on his work).

Brubaker's series, as I understand it, tells a new story with new characters for each storyline.  Gien the nature of crime movies and stories, it seems really how it should be.  Different tales from the mind of a guy who knows his territory.


The story is set in 1982, as our narrator is forced to return from the big city to the smalltown from whence he came for his father's funeral.  But we know he's been up to no good as he barely leaves his building before he's being reminded of considerable money owed to some leg-breaker.  Back home, he flashes back to welcome, simpler moments and yearns for both the life he sees he might have had, and relief from the joke of a marriage where he sticks around for his (unfaithful) wife's money.

And, of course, in flashback and in present, its all nicely analogous to the lives of America's Favorite Teen and his friends.

There's so much going on here, from the noirish, pulpy-stylings of Sean Phillips work to the flashbacks done with help from Val Staples in the form of old one-pager laff comics  from the Silver Age, and right down to the title of the book "Last of the Innocent", which echoes Wertham's infamous anti-comics screed Seduction of the Innocent...  Brubaker has already said in publicity that he's trying to play off Wertham's fears, of comics and their messages leading to a life of crime, but he's drawing a line from a path anyone could have wandered down, even the gang from Riverdale. 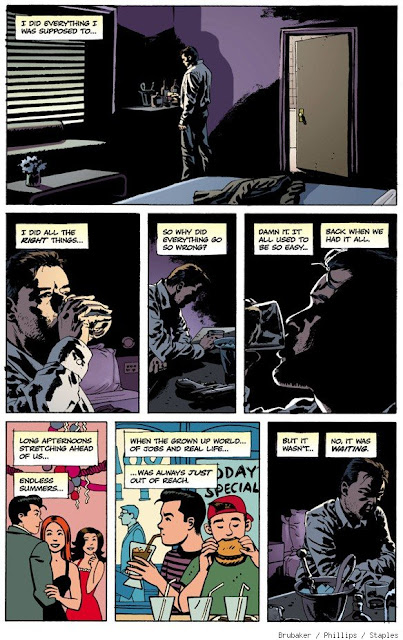 And I kid you not, this issue had the best final panel of any comic I've read in years.  It was GD-pitch-perfect noir.