For years I thought this movie was a screwball comedy based solely on the title. Eventually I figured out I was in no way correct on that score, and when I came across it in Eddie Muller's Dark City I knew I had to give it a try.  And, I kind of fell in love with the name.  Its got a real ring to it.

The Strange Love of Martha Ivers 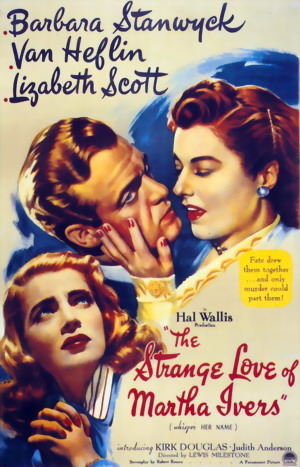 This 1946 movie stars some pretty darn big guns including Barbara Stanwyck, Van Heflin, Kirk Douglas and Lizabeth Scott, so its got its noir bona fides.  Its written by The Hustler writer/director Robert Rossen and directed by Lewis Milestone, who handled movies as diverse as 1939's Of Mice and Men to the great war picture, Pork Chop Hill.


I always like "out of the past" stories (who haunts us more than the people we knew as children or teen-agers?), and short of Once Upon a Time in America, its hard to think of a movie that does a better job of making (melo)drama out of the vagaries of one's youth.

The story begins with the accidental death/ manslaughter/ murder of Martha's domineering aunt and the collusion that goes along with that death.  Of the chilhood trio, Sam Masterson not only wasn't part of what happened, he also skipped town that night.  17 years later, Sam returns (now played by Van Heflin) to Iverstown quite by accident.

Martha's town has boomed as she's led her family's mill/factory/smokestack factory to undreamt of levels of success, and she's married Walter O'Neil, who has turned to drink even as he's let Martha set him up for political success as the DA (with plans beyond).  Walter is played by Kirk Douglas in one of his first roles, and its kind of wild to see him cast as an impotent nebbish when you grew up on tough-guy Kirk Douglas roles.

Before he stumbles across the O'Neils again, Sam meets hard-luck case Toni Marachek (Scott), and sparks fly.  But all too soon, things get complicated, Toni gets dragged into the mess and Sam is given the super-tough problem of having to pick between Barbara Stanwyck and Lizabeth Scott (shut up, Van Heflin).  As I said to Jamie when she looked up at the movie from her computer "these people are experiencing some complicated emotions".

I really liked Van Heflin in The Prowler, and I liked him all the better in this movie (you'll also remember him as the kid's dad in Shane).  He does a great job as the sort of man's-man/ everyman, and you have to admire his post-war cynical moxie.  I haven't seen Lizabeth Scott in much to date (I started Dark City on Netflix streaming, and just remembered I never finished it, which is crazy as it stars Cheston), and her character has enough layers that what could be the cloying counterbalance to Martha's bad-girl self never feels "too perfect" or sweet, and fits in just right in Iverstown.

The dynamic between Walter and Martha is an interesting bit of claustrophobic suffocation the two are doing to each other years after those who put them in their situation have passed on, but the two characters simply lack the ability to walk away, and the weight of their shared secret, mutual distrust and anger boils over once Sam resurfaces.

The scale of the movie is a bit small given how powerful the O'Neils have become by present day and the industrial backdrop suggested by the script, but perhaps that's the way things should feel when an old friend is back in town.  The script riffs on some fairly common threads of rich vs. poor, tilting towards Pre-War attitudes about the wealthy industrialist in the manse on the hill, and how that plays out for the likes of Sam Spade on a routine basis.  Had this movie's Sam never returned, sooner or later some private dick would be nosing around the ole Ivers place looking for clues as to why one O'Neil did the other in.

Like a lot of noir, there's some interesting coded sex going on, and you get the idea there was a reason a very young Martha hasn't quite forgotten ol' Sam Masterson.  And Sam must not have forgotten Martha, either, because there's a fairly odd cut during some smooching that adds some interesting bit of character to both if they did what I suspect they did.

The finale of the movie has the inevitable doom over it that good noir so often has.  You knew this was going to end poorly, but you're going to wind up there, anyway.  And so it does for our leads.