Dressin' Up for Halloween - The League puts on capes

So, Friday night Austin Books and Comics had a costume party.  I haven't seen too many pictures surface from the party (I didn't take any, but I know others did).

The concept was "Arkham Asylum" - the insane asylum where Batman sticks all his villains.  Well, I couldn't figure out how to come as Mr. Freeze or Killer Croc, the two villains my size would probably have sold best.  And I'm a Superman fan at heart, so...


For years and years I've wanted to dress as Bizarro, but I always knew it would just confuse trick-or-treaters, and I didn't want to explain myself at any Halloween parties.  But at ABC, I knew these were my peeps.  Sure enough, people seemed pleased to have Bizarro in their midst.  And, yes, I was emulating "New 52" Superman.

And last night, Jamie decided we were having a Halloween Party.  Sort of impromptu.  I did nothing to organize this shin-dig, but basically we were supposed to be going to a party that didn't happen, so we bought some booze, and... instant party. 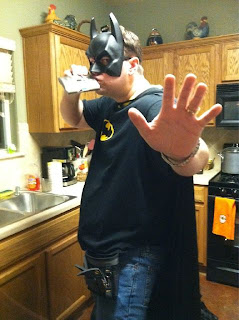 Monday night I'll wear the Superman get-up.  Its apparently a neighborhood tradition now, so I'm happy to do it.  I'll post a few pictures Monday night or Tuesday morning.
Posted by The League at 10/30/2011 12:03:00 PM