This evening Cartoon Network debuted the real start of DC Entertainment's all new DC Nation concept, kicking off an hour-long episode of the all new Green Lantern The Animated Series.

The show is the first 3D animated weekly show from DC, and I think it'll fit in neatly with both the other DC programming that's in 2D (such as Young Justice) and the very popular Star Wars: Clone Wars, which is some lovely 3D animation.

The GL of choice for this series is Hal Jordan, whom I guess the studio believed would be every kid's favorite action hero after the summer blockbuster, which...  yeah.  Luckily, the producers of this program (which include Bruce Timm and his style imprinted upon 3D), just sort of went off and did their own thing, more or less.  Honestly, they strayed quite a bit from the comics as well, and that's fine for this GL fanboy.

Not much time is spent on set-up.  Likely the producers were hoping kids had seen the movie or watched other GL material.  Instead, we get a quick overview of the basic GL concept, and then a pair of Green Lanterns grab an experimental (by Oan standards, so...  its really neat) spacecraft that's kind of a Lantern itself, and go off to find out why Lanterns are dying out in deep, deep space. 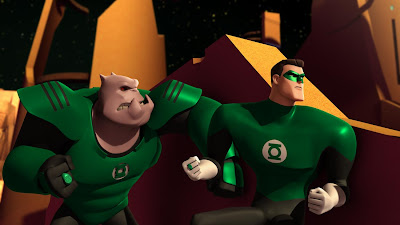 Basically, it seems the show is really the adventures of Hal Jordan and Kilowog, separated from the main force of the Corps and facing down the Red Lanterns.  Its not exactly comics cannon, but its also not exactly outside the realm of what I think you'd see in the comics, either.

The scenes we do get on Earth are mostly classic Jordan/ Carol Ferris/ he's a test pilot set-up, and we get just enough to ground Hal before he gets whisked off into space.  And then to the furthest reaches of space. Scenes on Oa seemed fairly dead on, minus the 3600 (or 7200, depending) Lanterns the movie had fun putting on screen and then ignoring.  The Jordan/ Guardians comabtive relationship is pretty well done and, as usual, the catalyst for the story (those darn humans just cannot take orders).

Our villain/ ongoing threat seems like it will be the fairly newish-from-the-comics Red Lanterns, but so far we've only seen three of them. 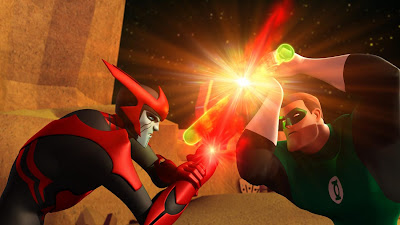 By and large, this is a kid-friendly introduction to the Green Lantern concept.  He's a space cop, he's got a side-kick/ pal, and there are obvious bad-guys with an agenda that sure looks pretty evil from the first minutes.

All in all, I thought it was a promising start.  The animators and directors clearly understood there's potential for interesting things with the constructs, everything is cartoony but well animated, and the new add-ons actually make perfect sense in the GL universe.

I'm guessing that the creative team just didn't like the idea of managing the sprawling cast of GLs that fans love, but would be a bit much for a TV show to handle narratively (the comics don't always do a great job of it, either), and someone had to start crying thinking of all the damn green that would wind up on screen with that many Lanterns.

I think its worth giving a shot.  Be ready for a more serious tone than I was expecting as we get towards the end of the show, but still relatively kid-friendly, I think.

Mixed in, Cartoon Network showed a short by Aardman Animation in the classic Creature Comforts style, but with Batman, the Joker and Superman voiced by kids.  Its really pretty awesome.

Owen and I tuned in for the new Green Lantern cartoon. Followed it up with some Thundercats. I hadnt realized they brought that franchise back.

They did indeed. I've never been a big Thundercats fan, so I haven't tuned in. But I hope Owen liked GL. Young boys need role models who hit on their bosses.

I am sure the show is good, but I can't stand that style of animation.

Give it a whirl. I adjusted to it pretty easily, but had the same initial reaction. Its no Pixar, but its a pretty good interpretation of the Timm style.