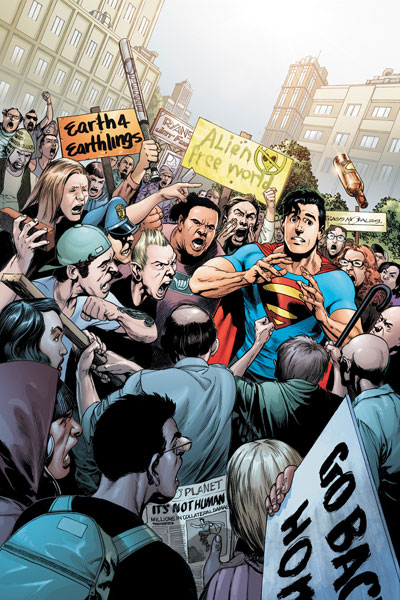 If anyone was going to up the ante on Byrne's vision for Krypton, or surpass the mix of nostalgic fantasy and futurist thinking that Mark Waid and Leinil Yu put together in Birthright, it seems fitting that DC paired an artist as meticulous and wildly creative as Gene Ha to bring the world of Krypton to life in a manner both new and familiar. I do not know if DC planned to have two separate artists for the Krypton and Earth sequences in this issue, but as much as I've been enjoying the super-heroic work of Rags Morales on this book, that first page, complete with a gurgling Kal-El and his star-filled eyes brought back memories of glory days on Top 10 and the magic I expected every time a new issue hit the stands.

For everyone who insisted that we never need to see another version or telling of the last days of Krypton, that its too well known, and that Morrison himself summed it up so perfectly in All Star Superman that the topic never needed revisiting, I'd point to the richness of story that comes from the tragedy that marks the final notes of a great cosmic civilization. In every incarnation, its a fable about hubris, and if we can cover the territory of myth repeatedly, in form after form, it seems not unreasonable to welcome a fresh telling of American myth and our own Atlantis, blown to bits across the cosmos rather than sinking beneath the waves.

Morrison is moving quickly here, the quick sketches he once filled with "mad ideas", somehow gelling into a coherent narrative now filled with the details and contents and mad ideas of others, pulled together in a piece strong or stronger than the individual parts.*  This is a comic written for the reader who can fill in the blanks, who knows what happens between panels or challenges those who don't to understand and infer without the guard rails of exposition or the talking heads which have become so popular of late (or the 1980's-style exposition  - every comic is someone's first comic - approach to the sister title, Superman).

Its not a challenging comic to read, and sales have been strong to date.  But I wonder if the writing style might prove unpopular just because it IS different.  So much is left virtually to ellipses, you could see this supposed 6 or 7 issue run extending well into 12 issues (something I'd welcome).

Morrison continues to mine Superman's history and spin it here.  Again, perhaps only Roberson's brief run of the past few years has shown both this much understanding of The Man of Steel.  There are a lot of details that are interesting, from Clark's use of the cape as a blanket, or, as we can guess, the blanket/ flag as a cape.  The flashbacks to Krypton and suggestions of a "ghost dog" watching over Clark telegraph an appearance by Krypto, perhaps safely trapped in the Phantom Zone.  And we're seeing Brainiac (a different Brainiac than the one tossed at us in the past few years) on the move.

And, frankly, this take on Lex, this insecure, clingy weirdo of a man is the freshest take on Lex in a while, which is remarkable given the great Lex stories I think we've seen the past decade.

As a plotpoint, Glenmorgan, the corporate tycoon Superman believed he'd cornered in the first issue, comes back with an anti-alien campaign, and its no surprise that the public begins to freak out a bit.  Its an interesting twist to the story, and not one we see much.  Usually its Lex concerned with the alien-ness, but that never really figured.  Its a different stance than the previous take on Superman in the DCU.  I doubt we'll see "good citizen Superman" for a while, given the takes in Action, Superman and Justice League.

Those concerned that Superman's actions in the first issue were poorly thought out are proven correct, that a corporate wunderkind like Glenmorgan might not be so easily handled by either the media or an alien see what unfolds in this issue, from the public reaction to claims of Superman's alien heritage to his ability to spin the stories and buy the victims created in the first issue.

Comics readers:  have patience.  These stories are not written for the single issue.  Whether readers became upset that Krypton was not shown in the first issue, or were concerned about certain plotpoints...  its the unfortunate side-effect of the monthly periodical that we must wait months in between installments before we can see story progression.  And it is a balancing act.  We've all read series believing that eventually the writer would clarify some omission or seemingly skewed plotpoint, only to experience disappointment.  But I think you have to hope a writer with Morrison's credentials is considering the angles.  And if he defies your expectations...  at least examine why he may have stepped away from your expectations.

Thus far, I'm more than satisfied.  The matching of Ha to the Krypton sequences is inspired, and I can get onboard with this trial-by-fire era for Superman that we've never really seen before.  If only DC had chosen to be as smart with its other newly-launched series.