A comic that's gotten sadly too little conversation, in my opinion, has been Garth Ennis' war comic, Battlefields.

Ennis is famous for Preacher, Hitman, Punisher: Welcome Back Frank, The Boys, Adventures in the Rifle Brigade and other over-the-top comics adventure stories aimed squarely at the 17-and-up crowd.  Yes, he knows how to a work a good de-nosing, be-facing, entrail gouge and other such entertaining topics into his work.  And, I admit, when I'm in the mood, I absolutely love that stuff.

But a number of years back now, Ennis did a two-issue, prestige format Enemy Ace story that more or less set up my current fascination with the character (especially after learning Pratt's work on War Idyll and the original Kanigher and Kubert work was so astoundingly good), and I'd highly recommend it as a good "here's a comic without superheroes" comic.

He went on to write some great stuff in his War Stories comics at DC, and, again, I'd recommend.

But a couple years back he started a new banner at Dynamite where he could tell short, 3 issue stories, called Battlefields. 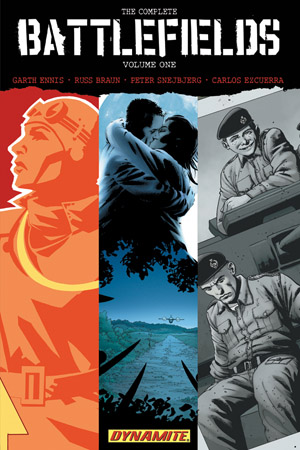 Truthfully, I'm not sure if I've discussed his work on Battlefields here before or not.  But it bears discussion.

Unlike most of comic-dom that plays with facts, refuses to do so much as a Google search on even the historical figures or events they're talking about, or grossly misrepresents facts in order to "tell the story", Ennis clearly does his research.  He clearly knows his topics, from New Zealand army bombers to British tank commands during WWII.  And on top of that, he tells brilliant, human stories in the grinder that is war.  Sometimes sentimental, sometimes less so, but never with the varnish of a John Wayne war movie, nor the melodramatic flair of Platoon, Ennis actually carves out a pretty straightforward way of relating his stories, and that makes the tragedy surrounding the characters all the more grim.

If you get a chance, at least pick up that first collection.  Its of 9 issues, 3 separate stories on 3 separate fronts, and all chillingly well told.  I'm pretty sure it'll mean you go ahead and pick up Volume 2.

While Ennis most definitely gets a nod of respect, there's so much more internet ink spilled (and I suspect sales are much higher on) his books like The Boys.  And that's great, but its missing what a tremendously talented and versatile (and damned smart) writer Ennis really can be.
Posted by The League at 12/09/2011 12:04:00 AM

Yeah, I like just about all of Ennis' stuff, and I'm afraid these books don't find a wide audience, because readers who really dig the shocking stuff may be let down, while readers who might like a thoughtful, gritty take on the war experience might be put off by this being the "dude who wrote the son of Satan and his talking rabbit" funny-books.

This is one of those places where the Direct Market can only go so far, I guess. We say "people", but I think we mean "people who walk into comic shops to buy superhero-ish or sci-fi books". My Dad stumbled across one of my copies of Battlefields and read both volumes over two days while at my house. He's not exactly a comics guy.

There may be an audience for this stuff, but it may not be at your LCS. That said, my LCS does a pretty good job of getting this sort of thing in people's hands, I think, if they think they'd be interested.