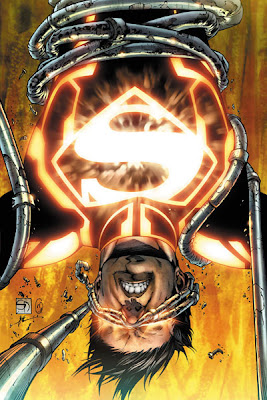 If I may... I hate the title of this issue. I know its a famous phrase, but it does have weight. Using Dr. King's words to title a Superboy issue that is entirely about made-up science fiction stuff... it just seems to unintentionally diminish the meaning of the "I Have a Dream" speech, which I am certain was not the intention of DC, but that's why Lobdell and DC's editors just need to be smarter.


The issue begins with the introduction of a meta-powered Micky and Mallory couple, then switches to our new Superboy apparently sloshing about in molten magma stating he's a mile beneath the Earth's surface and heading straight to the core (I only sort of remember why from last month).  My basic college geology classes (I took two, thank you) had some issues with everything in the magma sequence, but it did manage to give the reader some idea of how Superboy's powers will work (concentration!).

I just ask writers Google things like "how deep is the Earth's crust?" and "what is the Earth's crust made of?" if they're going to write a scene about falling through that crust.  But I suppose there could be volcanic fissures in the middle of the US.

The rest of the issue is a lot more of a mixed bag than the prior to issues, with a young vixen whose romantic encounter is violently interrupted by Superboy deciding to spurn her would-be-suitor for Superboy (and a tire iron thwacking that suggests Superboy is pretty invulnerable even without his powers on, unless Lobdell really thinks you'd just say "Ow!" after getting hit with a tire iron).  Its an odd sequence because it reminds me a bit of the confusing sexuality of Starfire in Lobdell's Red Hood and the Outlaws.  It just feels so contrived, its a bit icky.

Arriving in a small town to deposit said vixen, Superboy fights an alien, I guess, who "smells" Kryptonian, human and other alien DNA spliced in.  Which... sure, why not?  Let's drive the plot forward.  Why the alien has magma related powers, or telekinesis or what...  why bother to explain?

We then find Superboy back at NOWHERE (how he found his way back is muy mysterioso), where he angers Red, who has a secret of her own.

All in all, its a plot builder of an issue, but in reading it again for this review, its not very strong work.  There's no real story here, but stuff occurring to drive toward whatever Lobdell thinks is important, but the charm the first two issues had evaporates on the hot plate of narrative.  Lobdell's ability to tell a compelling story that uses the pieces he's got on the board just isn't very strong.

And, of course, we never learn who our Mickey and Mallory are, or what's happening.  This is some serious "writing for the trade" work.

I think this book might get dropped in favor of trades, but I'll give it one more issue.