Between movies, we had a bit of downtime, and so Doug and I joined Jenifer at her swanky apartment where we watched a B-Noir, Tension (1949).

Before we get any further, I had never been less sympathetic to any noir character than I was to Richard Basehart as Warren Quimby, a man who has a dilemma at one point in the movie of picking between Audrey Totter and Cyd Charisse.  Go to hell, Basehart. 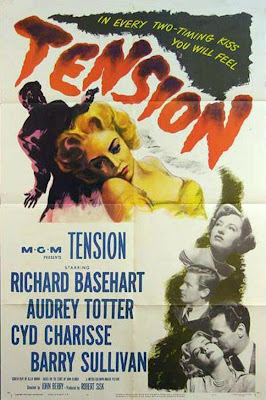 Tension probably has its roots in someone reading or seeing The Postman Always Rings Twice and the pot boiler melodramas of the era.  Postman had been adapted in 1946, and while there are limited similarities, you can see that the characters are sort of pushing around what the characters did when and why.  The movie also lifts from Superman comics and Charles Atlas ads, and so one must tip their hat to the writers and director for borrowing from the best.
Additional borrowing occurs as the score was recycled and repurposed in Cat on a Hot Tin Roof.

Warren Quimby (Basehart) plays a pharmacist married to Audrey Totter, who expected the fast life and wound up with a guy who works 60 hours a week on the night shift.  She's got a taste for fine things, and isn't shy about meeting men who can give her some of the luxuries she wants.

Totter is a sort of Lana Turner-ish/ Gloria Grahame-esque blond in this picture, and absolutely pitch perfect in making Claire Quimby her own, and clearly relishing making her someone Warren should really regret throwing in with.

Claire meets her "Mr. Big"* and immediately leaves Warren.  While heartbroken, he goes to speak to her at Big's house and maybe win her back, and, like the Charles Atlas ads, gets beaten down by Big in front of his girl.  Rather than send away for a kit explaining dynamic tension **, he begins to plot Big's murder.  And with the power of contact lenses (huge, frightening things in 1949), drops his glasses in order to have a second identity, one that will misdirect suspicion from good 'ol Warren.


The direction is mostly by the book, but its a fun, if not weighty, movie.  Totter is pleasantly over the top, Basehart plays the man over the tipping point convincingly, Cyd Charisse is Cyd Charisse (always a good thing), and the rest of the cast is punchy and spot on (including Tom D'Andrea who I'd only ever seen in Dark Passage and William Conrad with snacks).

You may also want to watch the cops in this movie, who aren't exactly shining pillars of scruples, but that was noir, I suppose.

Once again, money matters too much, and the scramble for wealth complicates matters of the heart, and lots of folks pay.  Its not groundbreaking, but I'd throw it in the DVD player again, just to see Totter's Claire and Charisse given the opportunity to act rather than just dance.


*we know Barney Deager has it made as he constantly has a cigar planted in his mouth.  I wish it were so easy to spot success these days.
**Not the tension described in the title of the movie
Posted by The League at 1/26/2012 02:03:00 PM