I'd been recommended the movie The Trip (2010) by a good pal who doesn't actually read this site, and so I should lie and say I selected the movie on my own.  We started watching the movie at his place two weeks ago, but I finally finished it last night on Netflix streaming. 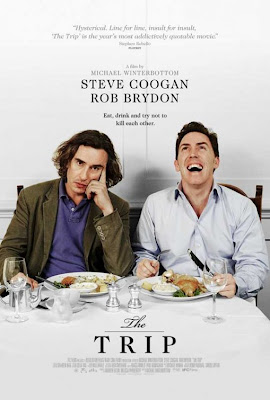 Its a small, inexpensive movie from the UK featuring Steve Coogan and Rob Brydon, and frankly, despite the fact that Mangum has very good taste in movies, I was skeptical.  The movie is about two actors named Steve and Rob (ahem) who go on a road trip through northern England.  The set-up is that Steve is writing an article about his trip for a UK publication, intending to bring his American girlfriend, but who departs for the States just before the trip (possibly ending their relationship).

Its a movie of First World Problems, and those of successful entertainers, but it still manages to keep the protagonists sympathetic both by making their problems sympathetic and basically relatable (and doesn't suggest Coogan, in particular, is exactly a victim).    Most curiously, the movie manages to balance out how the same things that make the two as popular as they are is both hilarious at times and flat out irritating at others, as is spending time in such close proximity for such a long time to someone you know so well.

The movie has large swaths of what I assume was improvised.  Its worth noting that the crew on this has worked together before, and clearly felt comfortable pushing one another both for better content and for some awkward moments.

Coogan's grappling with what is seeming like a near-miss of a huge career is contrasted against Brydon's apparent contentment, and what could have been a bit of oddly self-serving narrative actually works better than you'd think.  Coogan has had a less than hugely successful career in the US, including a smaller role in Tropical Thunder and in his starring turn in the not-great Hamlet 2.  One can't help but wonder exactly how much of this movie is just... is this just these two guys hanging out and letting someone film them in various scenarios?

Whether that's the focus of the movie or if we're to simply enjoy the banter, I'm not entirely sure.  Its not a life-changing film, but its very clever and occasionally outright funny.

I don't usually talk endings of movies, and I won't here other than to say that if you're going to make a movie about First World Problems, make sure it at least feels as if there's a point by the end.  This movie actually pulls that off pretty well, I think.

I think I might be the only person in America who actually thought Hamlet 2 was pretty funny.

I thought it had parts that were absolutely brilliant. And then parts that were just awkward. I loved that his critic was a 14 year old making cogent points. I loved the final production. But there was a lot of stuff around all that which didn't work for me.

I'm quite fond of Steve Coogan. His Tony Wilson in "24 Hour Party People" is spot on. There is nothing about that film I don't like. If I ever feel blue, that's the movie for me. His response to Shaun Ryder's pistol is sublime.

Regarding "The Trip..."
Brydon's "you're stuck in a metaphor" comment whilst Steve races across the river makes me laugh every time. And yes, I do rise at "9:30ish."

I'll def check this out, I agree with Nicole about "24 Hour Party People". It's interesting to watch that and "Closer" to get 2 completely different takes on the Joy Division story.