On my final night in San Francisco I joined Lauren (a trooper for making it out though still weak from several days of illness), Doug, Kristen, Morgan and (of course) Jenifer for a double feature of Laura (1944) and British noir film, Bedelia (1946).

It was an interesting contrast between the two movies, and I haven't seen all that much British noir.  Really, aside from Brighton Rock a year and a half ago, not much else pops immediately to mind.

Laura, of course, I'd seen before a few times (I own it on DVD), and I've covered it here before in brief.

On this viewing, I particularly appreciated Clifton Webb as Waldo Lydecker.  Webb plays the role pitch-perfect as the effete, urbane and witty sophisticate, perhaps at home at the Algonquin Round Table.  With a house full of fans of the film, it was a lot of fun. 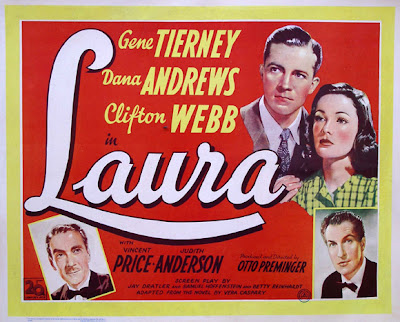 It still feels like a rather small movie, and there's no hint of the war-time release, but its still an effective picture.  Further, its not a movie that leans too heavily on Laura's place as a woman making her helpless from a financial perspective, which seems right for the time.  She may have received a break from Waldo, but she earns her place in the advertising world, and, in fact, its the towering Vincent Price who weasels for money, unable to support himself.

Unfortunately, the strong personalities in the film overshadow Dana Andrews' lantern-jawed cop, the standard square law man of so many of these pictures, and its more through discussion of his seeming obsession with Laura (something which has only around 60 hours to develop) that we see much depth.

As before, I'd recommend Laura as an entry point into noir-as-genre, as it does provide some of the usual touchstones of standard mystery stories as well as noir trappings.

The second picture featured was Bedelia, a movie which is relatively unknown in the US, produced in England and starring no Americans.  The movie was selected as a second example from writer Vera Caspary, who had written the novel of Laura as well as Bedelia, highlighting the role of women in the genre behind the lens as well as in front of it. 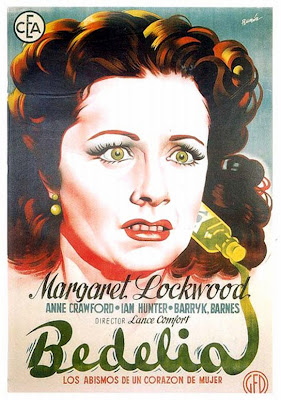 According to host Muller, Caspary had left home to pursue a life and career beyond the expectations of most women in the early 20th Century.  Like her character Laura, she had wound up in advertising where she was able to rise through the ranks.  Eventually she began writing novels, which Hollywood optioned and included her in the package.

Its worth noting that at the core of Bedelia you can see the femme fatale (the lovely and black be-decked Margaret Lockwood) as a warped shadow of the traditional expectations of a woman, especially in pre-1960's America (where Caspary hailed from, rather than England).  Bedelia marries for wealth and comfort, but repulsed by herself and the men she marries, and likely repulsed with herself, she doesn't pick divorce when it comes to a way out of wedlock.

Meanwhile, in the background, business partner, friend and quasi-confidant of Bedelia's husband, Ellen, lives happily with no such needs of marriage.  Or, of course, murder.

Of course the movie doesn't say anything directly about Ellen as the ideal model, but it also doesn't cast her as Miss Lonelyheart, either (while suggesting she may be the smartest person in the room).

Bedelia's foil, played by Barry K. Barnes, holds back as much as Bedelia herself, with each bit of new information he drops driving the plot forward a bit more, even as the action unfolds.  Its a nice bit of storytelling, and keeps the story from feeling as if its all revealed at once.

I don't know that I enjoyed it as much as Laura, but I did quite like Margaret Lockwood as our lady in black, and would give the movie a second viewing any time.

Laura was one of my favorite films growing up. I'm actually joining in a viewing of it tonight on Twitter with the hashtag #fauxhitchfest (a group of us who mainly watch the hitch but are switching things up).

That is awesome! I heard from my pal Morgan, and after the late show of Laura, he hung out with Dana Andrews daughter for a long time, until the theater kicked them out.

Enjoy the movie, and know I'm toasting Waldo this evening.