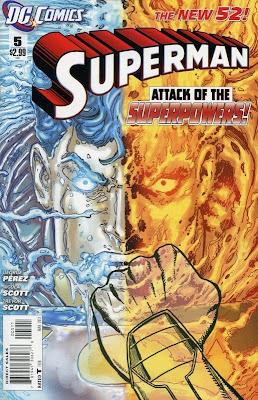 It seems like its been a good long while since I've talked Superman.  Not that anyone cares, but...  anyway.


As the New 52 books I'm willing to pay for monthly has dropped off substantially, I'm still happily in the minority of folks who are enjoying the new Superman title.  That's a relative thing, of course.  Its still not where it was in the final months prior to the reboot, and I'm still uncomfortable a bit with the new suit and status quo, but what this new series has managed to do fairly well that's been nearly absent for over a decade in the Superman titles is the development and maintenance of a Metropolis around Superman that feels worth reading about.

Johns and Busiek gave it a strong shot post OYL, but story needs seemed to want to ensure that Superman was anywhere but in the environs that 99% of the world's population expects/ hopes for when looking at a Superman comic.  We're finally getting some of that back.

Writer George Pérez has filled the complex media conglomerate which has engulfed the Daily Planet with a wide range of characters, all of them regular old people without powers or armor or demon heads (so far), and given them each motivations and a feel for their character. In short, Pérez hasn't ignored the formula that made Superman and superheroes work to begin with - that Superman is a unique being in the world, the people of Metropolis are always a bit in awe, and its the Planet staff that's translating Superman's derring-do for the world.

In a lot of ways, this comic is about press rooms trying to understand the story and struggles for control of the story in light of the fact that Superman's activities are becoming harder and harder to interpret since issue 1. Thus, the title of the issue. Is Superman a protector or menace to Metropolis?

The problem remains, however, that the book doesn't feel like the start of a series so much as a book picking up from the conclusion of a different storyline.  Due to the non-synchronous nature of Superman and Action Comics, and with Morrison steering Action, we just aren't getting much of a clue as to who our Superman is, and virtually nothing about Clark Kent.  Its the opposite of the tack taken in more successful efforts like Byrne's Man of Steel and Waid's superlative Birthright.  Frankly, it makes Superman a bit of a cipher in his own title, and that's not particularly a good thing.  We can't count on Lois shouting into cell phones to carry this book forever.

This launch has all the same awkward feel of Didio's One Year Later trainwreck, which promised to sort itself out, but editorial couldn't seem to bother itself with looping back and just filling in the gaps.  Here we have five years.  That's a lot of missing territory, and I don't know if the book and character can handle the stresses of too many question marks for too much longer.

I do think the page layouts and art by Nicola Scott are absolutely terrific.  I've seen some of Scott's other work and always been impressed, but I think she's doing a bang-up job interpreting this new look for The Man of Steel, and her Lois is absolutely spot on.

In a lot of ways, its the manner in which Pérez has managed to maximize the page and tell a story seemingly set in a world of adults that I appreciate (even if his dialogue for on-TV personalities leaves quite a bit to be desired).  Nicola Scott handles all the business gracefully and with more skill than the first artist on the book, and at least her Jimmy looks less like a crazy person.

The book definitely feels like its headed toward a point where we'll be wrapping up this first storyline in the next issue.  In two months Dan Jurgens and Keith Giffen take over the title.  Unfortunately, I think both they and myself am more excited about the storyline that will follow their first work, which Giffen stated was editorially mandated when they came on the book.   So we'll see.

I'm slightly better than luke-warm on the book at the moment, and so I'm hoping that another team