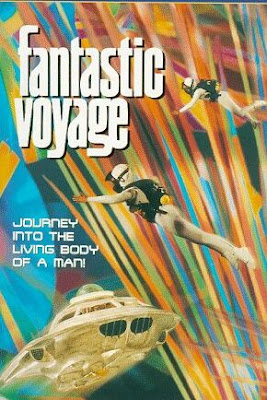 I got to see one of the more amazing sci-fi movies in 35mm, projected from the archival print from Fox.  That thing was immaculate, which enhanced the mind-bending visuals that set the movie apart.

Its 1966, and a scientist is being transported by G-Men.  During an assassination attempt, he receives a blow to the head which leads to a sort of clot in his brain.  The clot is in the center of the man's head, and any attempt to perform surgery will kill him, but the US of A needs the information contained in the scientist's noggin. 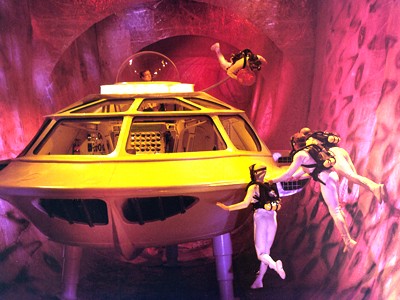 The only solution is to shrink down five people, put them in an tiny (and awesome) submarine and launch them into the man's bloodstream to locate and neutralize the clot.  There's one problem:  the shrinking process is imperfect.  In 60 minutes, they'll begin returning to normal size.  One of these people is Donald Pleasence.  Another:  Raquel Welch.  If you've done your math, you should have already determine that, yes, this movie is totally awesome.


I wonder if kids of today would understand that the world of 1966 was a world in which we had agreed that science was totally cool and would allow us to do the impossible, like reach the moon, split the atom and create Aquanet.  As such, we were really behind the government supporting crazy-assed-science (there is still an MS of Crazy Ass Science available at Arizona State).  The movie even includes a text prologue that basically says "we know this is BS, but, man, maybe not tomorrow.  SCIENCE!" and after the credits includes a thank you placard to SCIENCE and those who make it.

Not in their wildest dreams would anyone but Tom Hanks do that today.  I'm just saying.


Its not a particularly strange notion to want to get small, or at least, in the space age, want to start exploring in all directions, and that might mean looking not at just getting space all over your space suit or dropping yourself in a diving bell into the Marianas Trench.  That might also mean foregoing microscopes in order one might shrink to the size of a particle, give up this thing we call "mass" and "volume" and be injected into a 60-something gentlemen's aorta.

All this is true especially if Raquel Welch is going to be involved and the inside of the human body looks like the backdrop projected onto a strung up bedsheet at an early Jefferson Airplane show.

The movie unfolds more or less in real time, and its a hard thing to realize you would probably not make it through dinner with Donald Pleasence if 60 minutes in a contained space where there's plenty to distract you seems still like maybe too much.    Back in the properly-sized world, two guys around my dad's age talk about how weird it is that they've put these guys into one of their bros.

I would be lying if I said I did not know why Welch was cast, but its an interesting movie to see as its just before the era when movies would give up suggesting women should really be home making the male protagonist dinner and raising his kids.  Hell the first conversation we get between Grant and Cora he watches her MAKING A LASER (she's also a surgeon) and he suggests she might be handy around the kitchen, too.  That @#$% would get you slapped in any lab today and HR would probably suggest the slapee was probably due another half-dozen sharp thwacks to the face.

And, of course, Welch has a seen in which she steps out of her somewhat baggy coveralls to reveal her wetsuit shown entirely under the suggestion that we're really seeing she's concerned about the mission but, you know, scenes depicting one's inner concern are usually done in a close-up, not a lingering wide shot.  At the same time, you can imagine someone at the studio wanted to make sure they got their money's worth out of hiring Welch.

All that said - Welch's Cora is treated seriously as at least a junior scientist outside of the really awkward introduction, and that's a bit more rewarding than seeing the scientist in War of the Worlds get relegated to chirpy coffee-server the minute the men show up.  There's not really any romance to speak of in the movie, and its all business, even if the men DO have to save Welch from being crushed by anti-bodies (its kind of a good scene).  But, really, that could have happened to anyone.  We have Donald Pleasence around to buy as the weak physical and mental specimen.

I do think you could remake this movie with modern, less giggle-inducing FX and it would be fairly entertaining.  I have no doubt it would be a mid-budget vehicle for The Rock and the scientists would be replaced by wise-cracking kids, and the whole thing would suck.

I would be remiss to discuss the FX that is Raquel Welch but not mention the amazing model work, cinematography, set-design, color design and fake-blood-swimming that occurs throughout the movie.  Its insane for its time, and is a true achievement.  Its just terribly well done.

In a lot of ways, I appreciate the total sincerity with which the movie is made, the love and dedication that went into making sure it was as accurate as possible and that the challenges of the voyage are thought out extremely well for 1966-era technology.  I still highly recommend.
Posted by The League at 2/25/2012 11:33:00 PM

But what about the part where Coolio goes to DA beach?

Ah, 1994. We were still about finding that "song of the summer" then. Yes, it was a novelty song, and between episodes of The State and wondering what was up with the LA version of "The Real World" we all enjoyed the antics of Coolio. Almost 20 years gone by, I still think its one of the better summer anthems, and it managed to foist neither Sugar Ray nor Smashmouth upon a populace would learn to hate and fear both.*

*Between 1996-1997 during my tenure at Camelot records, we sold dozens of Smashmouth's debut album, almost all of which unhappy customers attempted to return, causing a chain-wide new policy that we would no longer take back records just because the purchaser did not like the record.

In a bit of a funny quirk, one of my friends in school was in the Greek system and they hosted an amateur boxing event + musical guest down at the Austin...mumble...whatever that venue on Nueces is called.

In any case, somehow these fellows procured the funds sufficient to bring Coolio from the Cool-cave and to give an intimate set featuring, of course, "Fantastic Voyage" and the moving "Dangerous Minds."

Yeah, Smashmouth, some day people are going to look at our generation funny for that one, perhaps when "They're old enough to rellaaaaaaate..."