I think I've seen Everybody Loves Raymond only four or five times, and at least two of those were in waiting rooms where I had no choice in the matter.  I'm pretty aware of the basic set-up, and find the actors okay, but somehow it didn't really grab me.  I will say, because I know you people and you think I'm all judgy...  I don't actively dislike the show.  I just never warmed to it the way I just never warm to a lot of perfectly decent shows.  Take House for example.  I don't know why I don't care that the show airs, but I watched one episode and that's all I've ever seen.

I do get how the show became a huge hit.  Developer and show-runner Phil Rosenthal is not incorrect in his narration of Exporting Raymond that the show appeals because its universal and relatable, no matter your income bracket, actual family make-up, politics, etc...  We all watch our parents with a low level of helpless dismay, we all watch our siblings believing they're permanently set to "goof" (sorry, dude.  Don't pretend like you think I'm Einstein over here), and we all both love and mentally/ emotionally grapple with our significant others and feel like we're barely in the game, let alone winning any debates. 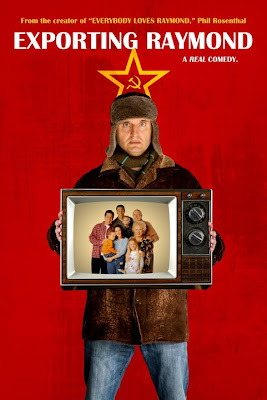 The movie of Exporting Raymond (2010) follows Rosenthal as he takes wildly popular American sitcom Everybody Loves Raymond to be reinterpreted and redeveloped in Moscow for the Russian audience.  He believes that the concepts and characters will have no problem making it in a 21st Century Russia due to the basic center of the show seeming relatively straightforward.


Its not a crazy idea.  American sitcom The Office was a very successful BBC show, and apparently its fairly routine for other countries to buy the rights and scripts from American programming and translate it for local tastes.  At the beginning of the film, Rosenthal explains that The Nanny has been a huge hit in Russia (even without Fran Drescher, which I find remarkable) as well as other American shows like Charles in Charge.

Russia is not, however, the US, and before Rosenthal even leaves the airport parking lot he's facing cultural differences.  And by the end of the first production meeting, I'll be honest, I give him a world of credit as I would have thrown in the towel mentally and just headed for the bar until my return flight.

Comedy is a cruel mistress.  Its hard enough to find five people to agree on the hilarity of any single movie, but is a mopey husband trying to keep himself and everyone else happy something that other cultures even value?

Heck, I don't watch Raymond, and that thing ran for nine years and had millions upon millions of viewers.  And I can't believe Arrested Development barely got three seasons.  So there you go.

Every decision about the show seems alien to the Russians, not the least of which is the highlighted debate with the lovely but semi-scary costume designer.  And the way in which Russia is developing shows is antithetical to the way in which the US has produced shows for years, including how many shows everyone on the cast and crew is working on at any given time.

The last thing I'd consider regarding Everybody Loves Raymond is that its cutting-edge comedy.  But the soft approach of the show, and the dropping of machismo behind closed doors is seen as "unfunny" and nearly impossible for the Russians to process.

Anyhow, its a study in how "the more different we are, the more we're alike".  Its the sort of warm fuzzy Rosenthal would have used to wrap up an episode of Raymond, but its also more or less true.  Of us 7 Billion running around this orb, we will always have more in common than identifiable, true differences.

Its a brief movie, but absolutely fascinating to see unfold.  And, as seems to be the cultural norm with Americans dealing with Russia, there is often some strange miscommunication, misunderstandings, and straight up mysteries that don't really resolve themselves.  Because, hey:  Russia.

Make sure you stick through the credits because they throw in some interesting bits that didn't quite make it into the flow of the film.
Posted by The League at 2/20/2012 09:40:00 PM