Thursday I learned that someone in the ever-reliable movie industry has decided to remake The Thin Man.  That is, as they say, a disappointment, and we can talk more about that production as the movie nears.  But it did fire me up to watch the final movie in the original William Powell/ Myrna Loy run. 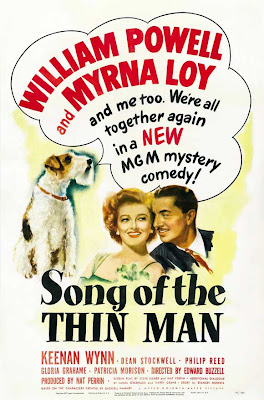 Song of the Thin Man (1947) is neck deep in the (white) New York jazz scene of the post WWII era, and catches us up with Nick and Nora now well settled into the role of parents of a 10 year old Nick Jr.  Tonally, the movie is the final conversion of Nick and Nora as sober, semi-responsible society folk and unlike the first appearance of the couple, plays off their "square-ness".  While they joke about booze, I'm not sure I saw them imbibe more than once in the course of the film.

An odd comparison to how they first appeared in 1934, but an interesting reflection of the move from the screwball movies of the pre WWII era to the movies meant for mass consumption as we rolled towards 1950's and TV's incessantly pleasant view of the world.

This movie, however, is now going to be my new favorite movie of all time despite the fact that it's arguably one of the weakest of the Thin Man movies (although I think its at least trying to get back to form after the bucolic, small-town murder of The Thin Man Goes Home), thanks to one serious consideration:

It's mindboggling.  Its like someone decided to make a movie just for me.

It also features a 10 year old Dean Stockwell as Nicky, Jr.  Which is just...  weird.

While certainly not as essential as the first three (or maybe four) in the series, its a nice little bow on the end of the series, and a nice upnote of a way to end the series.  The jazz-age detectives can still sleuth, but these hep cats and their crazy jazz scene are the new thing, dig?

The murder mystery of the film feels perfunctory, and the herding of the suspects together feels both daring and more ludicrous than usual, what with all the unnecessary witnesses, but in the harmless little movie, its all good.

While Nick does manage to do his detecting and Nora gets herself involved once again where maybe she shouldn't of, I did appreciate that Loy still seems more than present in the role and her quick embrace of hepcat lingo gives her a hilarious leg up on her master detective husband.  How many other movie series painted such a lovely picture of wedded bliss, even as bodies piled up all around them?

But, yeah.  Myrna Loy, Gloria Grahame and Marie Windsor in one movie.  Its the hat trick of movie dames here at The Signal Watch.

The Thin Man would return in the 1950's as a TV series featuring Peter Lawford and Phyllis Kirk.  I've never seen it rebroadcast or anyone clamoring for the show on DVD.  And I shudder at the upcoming rebirth of the series.

But we'll always have these movies, and perhaps a reboot will direct young film fans to the original series to see what all the fuss was about.