Substituting Real Life for a life made better through Narrative Construction

In the past few weeks I've had three separate conversations with three separate people from very, very different backgrounds, all of whom were describing their individual situations and then wound up throwing their hands in the air and saying "this isn't how it is in the movies!"  They were not being hyperbolic or kidding.

I don't know if its any different from how CNN's favorite line from witnesses since 9/11 has been "it was like something out of a movie".  On the news, it seems, it's the only way to describe the fact that you're in one of those make-or-break/ life-or-death situations that comes along but once in a blue moon.  Unless you're in movies and your name is John McClane.

Have we found ourselves in a place where we speak more often about the construction of fictional character's lives than our own that our only model for how things go in life is in the condensed and scripted world of television and movies?  Are we learning more from watching Harry and Sally falling in love than we are from watching our parents or talking to friends?

As you know, I watch Mad Men, a program I feel manages to do what good fiction can do, and that's tell us something about the universal "us" or about ourselves as flawed, hypocritical, deceitful, kind, odd people who want to do the right thing, or the thing that we hope is right for us.  The program gets a lot of press coverage, and is well rewarded for its efforts by people who give out statuettes.  By taking place in the 1960's rather than today, we get some comforting distance, all while having a limited omniscience as viewers as we know where the world in which these characters are living is headed while they're just along for the ride.  Its meant everything from the shock of a Muhammad Ali win to the death of John F. Kennedy stopping everyone in their tracks for an episode.

On the season opener, which aired Sunday, apparently the opening sequence in which young advertising executives (not at Don's advertising agency, but another) were throwing bags of water down at African Americans from their Manhattan skyscraper offices while on the sidewalks a group of black protesters asked for equal treatment - was apparently pulled line for line from a newspaper story from the period in which the episode occurs.

I can see how, without knowing exactly that this scene was real, that it may have felt a bit forced or on the nose.  But - the thing happened, and the quotes are from the paper of record, not the fevered brain of a hack film major doing a very important script about racial awareness.  What doesn't surprise me, I suppose, is that this isn't good enough for critics.

According to the article:


The critics, informed that the scene that seemed to them to be wooden was in fact born of flesh and blood, stood their ground.
Mr. Hale: “There is no connection between the fact that it actually happened and the scene was taken from a New York Times article and whether the scene was any good or not.”
Of the “savages” quote, he said, “When she said that, it just rings so false.”
Mr. Seitz: “It’s good to know that all that actually happened, but it’s still a terrible line in context of the scene, because it’s an editorial summing-up that tells us all how to feel.”

I'm not sure what this is saying.  Did the scene not work?  While it isn't Mad Men's usual brand of elliptical communication and what character's say isn't what they mean, did it feel false?  If a person actually says something which does sum up a situation, is it really that it can't or shouldn't be said, just because it doesn't match the usual narrative flow of a show?  Are we looking at the Man Who Shot Liberty Valance model here of "This is the West, sir!  When the legend becomes fact, print the legend!"?

Or is it because we would rather life fit our management of reality and expectations built by construction than be the surprising, caustic thing it can be, that so often intrudes upon our fantasy?

I'm not upset by the critics.  They have their point of view, and its one I find fascinating.  In this model, we subvert what actually happened if it doesn't make TV as good as it could be.  Its certainly a legitimate idea, as it asks the creators to hew to a certain idea of "the truth of the idea of the scene" rather than the truth, in order to sell the scene (and thus sell the show, and thus sell beer and fashionable cars... you know, if you want to get specific).

Are these quoted critics presuming they know how a character with but a single line would and should speak as they enter the scene?  That, in a way, is fascinating.  That Mad Men has created a world in which anything which enters the mise en scène of the program must comport to the world the prior 4 seasons of, let's be honest, white folks in skyscrapers, set in motion in their WASPy desperation - or the illusion is shattered.  Or, if we can't quietly just root for the elevator operator secretly rolling his eyes at Pete Campbell as a sign of rebellion, this isn't going to work for us white folks watching the show.

I'm not sure I'm comfortable with tossing reality for narrative expediency, but that's where we're at.

If I can circle back to the three conversations I had in which folks were waxing rhapsodic about the messy nature of what was going on in their lives versus the confines of the theater or television screens, I find it something to consider regarding our expectations of what happens within the confines of the few minutes to 120 years we have on this orb circling around a yellow star.  I'm not so sure that this line of thinking, of "but life isn't like TV or the movies, and that's frustrating" isn't a direct by-product of our criticism of media that doesn't adhere to guidelines and rules set by folks who spend all day watching TV and movies.  What do we want?  What do we expect?  Will we only be happy when we can safely move out of our lives and into the living rooms of Fahrenheit 451 with the relatives telling us what part we're to read from in the teleplay that will make us the wittiest and the star?  Do we need our dialog to sound just right in life to be believable?  When someone in the room says what needs to be said, are we going to tut-tut because it was too "on the nose?"

This is all getting a little heavy.  Let's all think about Megan's performance of "Zou Bisou Bisou" for a mo' instead. 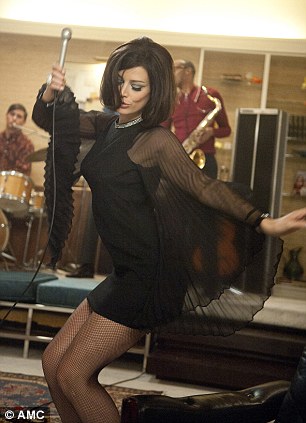 Also, if I am ever a father, I now know exactly the circumstances and how it will look.

You should read Mendelsohn's take on "Mad Men": http://www.nybooks.com/articles/archives/2011/feb/24/mad-men-account/?pagination=false.

I read this awhile ago, and I thought his take on the show (and its popularity) was insightful. Plus, I like the author -- he's the classicist who wrote "The Lost."

I would actually argue quite a bit of the Mendehlsohn article, that it didn't meet his standard of what he thought a show about the 60's should be, of juicy performances that met his checklist of criteria. I agree the show is soapy, but unless you're doing a police procedural, show me one that isn't - or, show me how the things he dismisses as soapy aren't also the basis for what's usually considered relatable (melo)drama.

To me, Mendelsohn reads like someone who feels guilty getting invested in the bourgeois trappings of the show, but if he is, he's kind of missing the point. They are trappings, the characters aren't heroes and villains with clear, marxist-favoring tendencies a critic can get behind.

What he considers unfleshed out scenes could be considered ellipses of spartan writing. We don't need to dwell in those places because the scenes convey what we need to know. We don't have a Don Draper making monologues because Don Draper wouldn't know what to say if he had to monologue.

I'd point to Medelsohn's frustration with the conclusion to the Sal character's arc, which saw Sal simply disappear after being uncloseted. Rather than trying to understand that choice, Mendelsohn seems frustrated that he isn't getting his comeuppance of society for repressing Sal. But part of the point of that sequence was to narrate and dramatize several things, from the entrenchment of anti-gay attitudes to the point where the characters don't ever speak of him again, to how we do forget people once they walk out the door, and... we've seen the story Mendelsohn is asking for played out a hundred times before on television and in movies. But I think the honest answer, and the one he finds so vexing, is that it IS about caving in to power as he suggests. So what does THAT tell us?

I'm not the credentialed critic, and Mendelsohn's opinion is valid, but I also think its highly debatable. I do think the initial appeal of the show did rely upon the high style, the differing social mores, etc... but I'd actually point to what I said above about critics lack of acceptance about narrative fitting preconceived notions and criticizing when it doesn't fit their checklist of "good television".