In the run up to this summer's Avengers movie, Jamie and I are going to be watching the individual superhero movies that will take us right up to the big team-up picture.  Its a lot of flicks.  The Alamo will be running a marathon, but I just can't see myself sitting through what has to be roughly 12 hours of Marvel action of movies I've seen already multiple times.


That doesn't mean I don't actually quite like most of the movies, but...  I dunno.  The Planet of the Apes marathon was just truly something Ahab-like that I felt I had to do once in my life.  Now, if they screened all the Superman movies...  now we're talking.

Iron Man (2008) still holds up remarkably well, even if this was the first time I wondered why the 10 Rings terrorist association wanted Tony Stark to build the missile rather than kill him as Obadbiah Stane had requested to garner goodwill and maybe get those Jericho missiles off a truck. 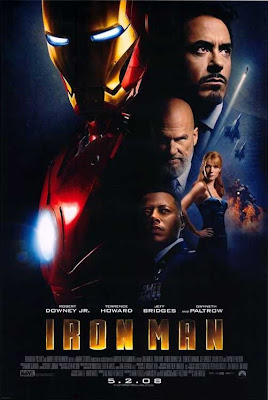 Looking at Iron Man and comparing it to DC's attempt to launch a hydra-headed franchise like Avengers with Green Lantern, its a reminder that WB and DCE are really, really bad at all this, and there's no reason to think that they won't really mess up the upcoming Superman film, Man of Steel.  DC's answer to a cocksure hero like Tony Stark didn't work with the Ryan Reynold's "I'm a loveable goof" take on Hal Jordan, a terrible costume and pretty much no motivation for our hero or the audience to embrace.

Iron Man was actually such a trick and gave such a clear arc to Tony Stark as a character that trying to repeat the narrative success in the sequel didn't really take.  I recall not being exactly bored during Iron Man 2, but also knowing that they were going to learn a lot about what was missing for when they wrote the third installment.

May I also add:  I really like Gwyneth Paltrow in this movie.  I can genuinely say I never thought I'd give a damn about Pepper Potts, but I like her understated performance.  She isn't given that much to do in this boy's own adventure, but she manages to do a lot with what's on the page and feel like a bit more than the girlfriend-in-trouble that Kirsten Dunst got stuck playing over three Spidey movies.  Her scenes with Robert Downey Jr.'s force of nature Tony Stark feel terribly natural in the work-wife sort of vibe, and the dialog just works (see: the scene where she has to swap out Tony's batteries).  It goes a long way.

And, of course, Jeff Bridges as a super-villain?  This movie is just terribly well cast all the way down the line, including Clark Gregg as Agent Coulson, everyone's favorite G-Man.

Its a fun movie, even if it boils down to mad-scientist antics and two dudes slugging it out on a rooftop and goofing on a bit of BS for the conclusion to their spat (I am sure one can read all sorts of symbolism into the Arc Generator killing Stane, but I doubt 1 in 20 filmgoers found themselves weeping at all the lovely irony).

The BF and I are doing the marathon in Boston. I've seen them all except Hulk, but not more than a couple of times at most. I am SUPER EXCITED (and will be packing a lot of red bull and snacks haha).

I salute your dedication to the Avengers! Enjoy. Hulk is okie dokey, but maybe the smallest scale of the any of the Avengers flicks. I actually liked it a lot, but I don't read Hulk comics, and I'm not sure other folks were all that into it.