Avengers Assemble! Saluting Jack Kirby and dealing with the complications as a fan


It's hard to underestimate the cultural impact of comics creator Jack Kirby.  He may not carry the cultural cache of a JD Salinger, but he's probably as widely read, and inspired an army of imitators and worshippers.  And, hey, you can't find action figures nor bedsheets of Holden Caulfield.


Kirby didn't create Superman or Batman, but he was part of the creation of (an incomplete list to be sure):
and there are some versions of Kirby's bio that suggest he was the guy who originally pitched a "Spider-Man" to Marvel and didn't do the series as he was too busy (not hard to believe).

He also did books that he didn't create (Jimmy Olsen, his mind-bending 2001 work), created romance comics, westerns, and a hundred other things that are somewhat forgotten.

Kirby's output was absolutely astounding.  In the early 1970's, he was putting out four DC books simultaneously in his New Gods opus.  His time at the start of Marvel's launch was absolutely superhuman in and of itself, especially when you consider that he was mostly drawing stories that had no script, but had just been bullet-points drummed up in the office with Stan Lee.

Born Jacob Kurtzberg in 1917's Lower East Side, Kirby was a product of a tough lower-class upbringing, and became a largely self-taught artist and story-teller.  His background pops up in interesting places, from his creation of The Newsboys to how he portrayed Ben Grimm's background (and how Marvel has sort of turned Ben Grimm - aka The Thing - into an avatar for Kirby, including confirming his Jewish faith).  His name pops up from the very beginnings of The Golden Age of comics (which starts with the appearance of Superman in Action Comics #1).  Kirby was working alongside the Iger and Eisners.


We're highlighting some of the creators this week behind the characters you will be seeing in The Avengers movie as Marvel (and now Disney and Paramount) have a vested interest in keeping the names of the creators out of print.  Rumor has it that Kirby doesn't receive an acknowledgment in the credits for co-creating the first issue of Avengers, Captain America (pre-Stan Lee), Hulk or Thor.  Nor Nick Fury.  As corporate owned and managed properties, its easy to forget that it wasn't Stan Lee at the drawing table, and if you know anything about the Marvel-method of creating comics, you know the artists have always been the primary story tellers, with writers coming back later to fill in dialog.


I don't begrudge Stan his latest wave of fame, or his role as Walt Disney to the Marvel company.  He was absolutely instrumental in the 60's pop wave of new Marvel titles that more or less saved superhero comics and changed the industry forever.  And comics nuts would do well to remember that Stan's move to the west coast to bring Marvel characters to TV and movies has been a huge part of why there is still a Marvel Comics.  But...


Once Stan was out of the picture at Marvel on a day-to-day basis, its hard to ignore how Marvel shunted him to the side, changed his contracts, held onto his original art (reselling art was and is a major source of income for comics artists), and basically didn't blink when he said he was leaving for DC.


At DC, Kirby had a creatively explosive run on several books, but I'd suggest that Kirby had done what many great artists do.  He'd moved beyond what the mainstream expected and therefore wanted, and his creative revolution didn't translate to sales.

While fighting a bit with Marvel for the return of his work, Kirby went on to design for animation (see: Thundarr The Barbarian), and develop his own line of books.

Jack Kirby passed in 1994, but his influence on today's creators in comics, movies and animation has been inescapable.  DC has recently borrowed from his New Gods mythology for use in the Final Crisis series, and Darkseid was portrayed as the galvanizing force for the Justice League to assemble in the New-52 Universe.  In the Young Justice cartoon, we're currently seeing The Super-Cycle (and product of Kirby's 70's series The Forever People) and Darkseid's minion, Glorious Godfrey, showed up last episode.  And Godfrey ALWAYS shows up as a precursor to Darkseid.  And, of course, Justice League Unlimited was one huge tribute to Kirby's design aesthetic.

There's such a fandom for Kirby and his work that there's a magazine dedicated entirely to Kirby appreciation, The Kirby Collector.

Both DC and Marvel comics continue to borrow from Kirby's style, be it Kirby dots or the dramatic framing of a scene, or exactly what cosmic technology needs to look like.  A few books out there are huge tributes to Kirby, from American Barbarian, to Godland, to DC's recent DOA revival of OMAC (maybe the most retro of DC's relaunches and actually kind of fun).  Really, its hard to underestimate the power of Kirby's imagery, and its one of those things that sets him apart from his predecessors or successors.  The dynamic action became even more pronounced later in Kirby's career and the dialog all the more bombastic.  He simply had a certain...  operatic isn't really the word...  but larger-than-life feel to it.


But the Marvel Universe has Kirby in its very DNA.  You can't escape the influence he had on not just the books he was drawing, but on the rest of the Marvel U, including Spidey and Iron Man (who was co-opted into The Avengers from day one).

Today, the Kirby family sees no direct financial recompense from Marvel for use of the Kirby name or characters.  They were created work-for-hire, and Marvel has had no legal obligation to pay any sort of fee or royalty.  Following in the footsteps of the Siegels, the Kirby's recently tried to make a legal claim on the properties co-developed by Jack Kirby and lost the case.

A lot of other comics folks are saying they'll boycott the movie.  I'm not going to.  I have hopes that the high profile nature of the movie will draw media attention to Kirby and the situation surrounding ownership, residuals, etc...

There's not much I can do about Marvel's legal action, and while I appreciate the boycott, I'm not sure what one does at this point without just quitting Marvel (apparently Kirby had a better deal with DC).  I do think its wrong that Kirby isn't better credited or celebrated by Marvel.  It seems a path to legitimacy as an artform to have creators whose names are as important as their creations or adaptations.

This year I will join The Kirby Museum and see what we can't do to promote Kirby's role in popular culture and art.  I'll share what I can about Kirby, and write posts like this and hope the mainstream press catches on and makes a big deal out of it.

In conclusion:  At our house, we have The Fortress.

Oh, and who is that? 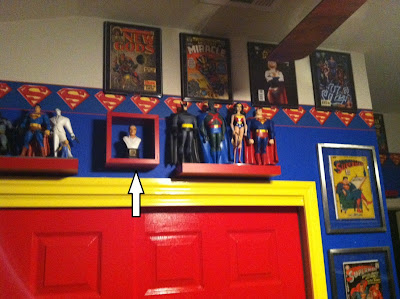 Jack watches over us all...