It seems like just yesterday that I went to see Thor (2011) a second time in the theater.  Yeah, I pretty much liked it that much, plus, I don't think I paid to see it on round 2.

CanadianSimon is a big fan of the Thor comics, but I'd never really read them.  Something about Thor didn't click with me when I was a kid, and then as an "adult", I just never swung back to checking out the character for more than a few issues at a time. 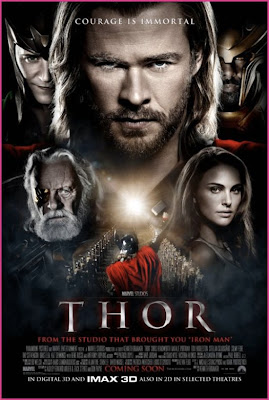 Anyway, I stand by my review of about 12 months ago, give or take a week.  Its still a nifty movie with cool FX, a swell cast, and a story I find oddly moving for a movie about two brothers with very different takes on filial piety and affection.  Sometimes a story, even one about transdimensional space gods, can be universal enough at its core to be effective.

I really like Chris Hemsworth in this movie.  He's actually quite good, especially when you realize he's working with folks like Rene Russo, Idris Elba, Anthony Hopkins, Natalie Portman and the very, very talented Tom Hiddleston who plays Loki.  Hewsworth was almost unrecognizable (but well cast) in The Cabin in the Woods, and I hope he does well.  Hollywood needs to make room for more actors over 5'6".

Also, this movie has Sif.  And that is okay by me.


So now we're down to Captain America, and then Avengers itself.

I wish I could find some way to salute Jack Kirby in all this.  After all, Kirby originally envisioned Thor, Captain America, The Hulk, and the concept of The Avengers.  If you have ideas for what we can do to salute King Kirby, lemme know via email.

I was really surprised how much I liked this. Of the pre-Avengers movies, this one is second only to the Iron Man films for me. Hemsworth is a star in the making. He's eminently likable and good actor to boot. That scene where he gets his powers back and takes out the Destroyer was pretty awesome, and reminds us that in terms of power, he's pretty much Marvel's equivalent of Superman.

CanadianSimon, wait that's me, is probably more of a fan of Walt Simonson than Thor to be honest. In fact I will take you up on your challenge in your other post and write up something on Simonson.

With regards to Thor movie I really enjoyed it. The comedy interspersed with the drama quite well.