I have never been to Comic-Con International in San Diego.  I am on record as finding the much smaller Cons I've attended here in Austin and one in Phoenix sort of depressing, expensive and uncomfortable.  So, selling me on the ideal that Comic-Con is a sort of geek-topia where nobody need feel out of place as they pursue their passions doesn't necessarily sing.

This evening we checked out the latest Morgan Spurlock documentary, Comic-Con Episode IV: A Fan's Hope.  As suggested by the grating title, the movie seems done by folks with a cursory knowledge of the sci-fi, gamer and comic geek culture, and outsider looking in and starting to understand the contours enough to know "oh, Star Wars isn't just called Star Wars?  Weird!" but not enough to realize everyone in the Cantina has a name and homeworld the Star Wars geeks will know. 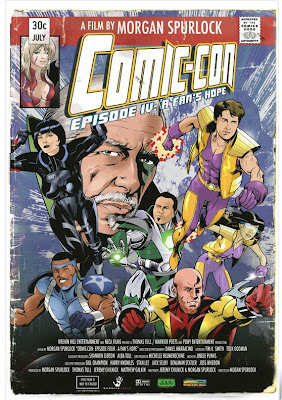 The doc is relentlessly pro-ComicCon, told from an outsiders enthusiastic perspective, perhaps not entirely seeming to know what its doing sometimes right up to and including the "let's switch to comics panels between scenes" thing you've seen in a few other comics-related films, not the least of which was last year's HBO doc on real-life superheroes (who went to ComicCon.  Awk-ward).

That said, I actually quite enjoyed the documentary.  I don't think director Morgan Spurlock oversells the enthusiasm of the folks who attend, and the sorts of folks who the doc profiles seems like a pretty good cross-section fit, be it the wanna-be artists, the painfully awkward couple who found love at the previous year's CCI, the toy collector, the "famous to comics collectors" retailer, the video-game-centric 20-somethings there for participation in the Con's masquerade, and the name-brand geeks they interview from, if I can be honest, mostly movies and TV.

Its easy to get caught up in wanting to discuss how much comics have been sidelined at CCI, and I'd argue that the doc both covers this and plays a part in it, but it feels more like a reflection of the times and what's happening in comics more than anything else.  It does seem like a big party where folks dress up all crazy, and you can see and buy weird stuff.  I'm a bit unclear as to how it's actually social, but its close enough, I guess.  And despite the implied the suggestion this is the case...  they certainly don't demonstrate anything of the sort.  It feels sort of lonely watching these folks hustling their dreams in a crowded convention hall.

The doc also doesn't talk much about what is actually happening in the convention halls or on the floor.  Its a lot more interested in "what happened to these few people over a few days in one crazy place", and that's not all bad.  Its also probably a good fit for a broader audience than "we do lots of panels about specific creators, characters, etc..."

Frankly, I'm totally impressed with the quality of audio and video from such a chaotic environment, and how well the stories seem to shape, maybe because the arcs are short and somewhat predictable.  Spurlock and his crew seem to just be dipping their toe into the sorts of questions someone like myself might want to see dipped into a bit more.  For example:  during the very brief coverage of the toy collector - why was there an issue with people getting in line in front of him?  Why was Hasbro selling more than one toy to each customer?  What was special about 18" Galactus (that one I sort of know, but...)*.

Wisely, Spurlock never questions the passions of the fans or relevancy of what they're saying.  I think this may also be the most likable I've ever found Kevin Smith (which, truthfully, is a pretty low bar which he seems to never quite rise over) as he talks his love of geek culture that makes up CCI.  It gives the enthusiasm a chance to blossom without judgment or criticism.

But... at the same time, it would have been nice to explore "why".  I have a feeling that digging under the surface might dredge up some weird stories, some fun, some depressing.  But it might have helped get us a little closer to the "why?" that seems to be at the periphery of all the story-arcs and never gets directly addressed.

And tied to "why"is the question "is this sort of...  not okay?".  Especially when the film ends with Kevin Smith dismissing two ongoing wars by omission and talking about Wonder Woman's pants...  it takes me right back into the geek shame-cave, and the importance me and my kind put on the most trivial of pursuits.

If you hang about comic shops or pay attention to much geek culture, there's little that will surprise you.  It all feels pretty familiar, from the clumsy romance to the artist seeking opportunity with maybe an overblown sense of destiny.

For another view, Noah talk about the film: http://noahkuttler.wordpress.com/2012/04/08/review-comic-con-episode-iv-a-fans-hope/