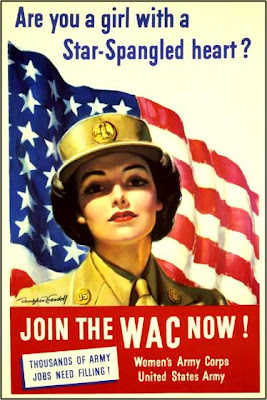 
Perhaps because of the necessity for everyone to wear a lot of hats in the first two or three hundred years of first European settlement and then reshaping of the continent, women have always played a part.  You don't need to just look to Betsy Ross's contribution in The Revolutionary War.  I'm not sure if they're still teaching about Molly Pitcher in history classes, but they should be.

Of course women played a significant role during the American Civil War, but it wouldn't be until World War I that women would be admitted to the military with ranks, almost entirely as nurses and therapists.  While Rosie the Riveter may be what many of us think of as the quintessential pivot point for women, WWI saw women working in munitions factories and in many other roles usually reserved for men, including during wartime.  Women would not be given the right to vote until June 4 of 1919, and the Treaty of Versailles would be signed on the 28th.

Clearly I'm no military history expert, but on this day when we'll see a lot of images of the many men who gave everything, there were women pushing the boundaries of expectation and serving where they could.

Nice post I also liked the images you linked. I started collecting WAVES war posters in high school. I'm hoping Jason will make some room in his house so that I can display them. :) I've already got one up on the wall.

Amy and I have split up the wall space on the basis of height. She can hang up anything she wants as long as it's displayed four feet or below.