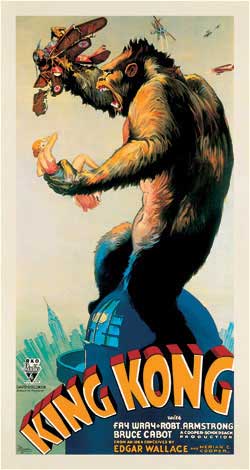 But growing up, we had a huge, hardcover book that told the story of King Kong, and lots of movie monster books (it was the end of the 1970's), and I remember my Dad reading me the story in sections before bed over the course of a week or so.

There was some concern when I heard the story that it might be too scary, but somehow giant apes and dinosaurs seemed far enough removed that it never spooked me.  Instead, I think I felt like Kong was the hero of this story, and it was the first story I heard where the hero lost at the end, and not in a way like Empire Strikes Back where a sequel was certain (even if it would be years away).

At long last, I came upon the movie one night on AMC, back when the initials stood for American Movie Classics.  I taped it on VHS, watching it that weekend, and I wasn't just impressed, I was floored.  Somehow the movie was far more than I had imagined, even after seeing the 70's version.  Perhaps it was the glow of the silver picture, or Fay Wray's screams, or characters jauntily waltzing into danger, not trying to be jaded 1970's movie types...  The dinosaurs and bi-planes blew my mind, as much as the quick conclusion of the film after such a harrowing build-up.

But until this evening I'd never seen the movie on the big screen.

Of late, Martin Scorsese's Film Foundation was been in motion working to restore classic 35mm films, and while King Kong may not getting all the accolades of some other works, its still massively popular, it created a cultural phenomenon that carries on to this day, and...  I think this is worth noting:  King Kong was also created for film.  Its not the adaptation of a book, myth or play.  It was, simply, a movie, and one that inspired countless imitators.

Yes, the script is more than occasionally clunky with lines that you can't believe someone didn't take back to the director for a re-write, and by modern sensibilities, it is, uh, ethnically complicated.  But its such a fantastic product of the adventure genre, daring the viewer not to get caught up in the mysterious world of Skull Island (SKULL ISLAND!) with its lost tribe, its bizarre fauna and, you know, giant apes mistaken for gods.

On the big screen, you can really see the detail, the work and craft that went into making the movie with its immersive environment of moving creatures, humans moving in the periphery (sometimes in stop motion, sometimes matted in).   Unlike today's special effects, the look of the movie feels crafted, the imperfections on the screen and part of the other worldly look of Kong and everything he touches.

What's interesting about Kong is that its not really an allegory for anything, short of man trying to conquer nature.  But even there, that's a stretch.  Is it about trying to hold onto something bigger than yourself, be it Carl Denham trying to seize nature for display or Kong trying to conquer all in front of him?  Or is it about a dude who goes soft because he met the wrong girl, and that softness kills him?

I'll never really be sure.  Sometimes a giant ape is just a giant ape.

What I do know:  Man, I love a good rampaging sequence in a movie, and Kong sets a really high standard for urban rampaging.  He demolishes subway lines and cars, he pulls women out of bed and chucks them several stories onto the street...  there's not much our friend Kong won't do in the name of a bit of mayhem.

I can totally get behind that.

Of the cast, only the lovely Fay Wray wound up in the pantheon of movie names.  Maybe it was those legs hanging out of Kong's hand, or the masterful scream she let loose on demand.  She did, in fact, fill out her dresses just fine.  But she, Cabot and Robert Armstrong are all fine in an early-talkies, hammy sort of way that hints at the omnipresent subtext of:  Giant ape?  Unlikely, but why not?

Anyhow, its still a rush of a movie, and if it comes through, you kind of have to go, just to get a smattering of how it must have been like to see this thing unspool back in 1933, when nothing like it had really existed before, but it would create a limitless supply of imitators and sequels.

I think you hit it on the head - an ape movie is a monkey movie. Yes, it had scenes where the actors essentially said, "Look at that!" followed by some claymation, but that's not all that different from modern CGI eye-fests like Transformers.

But who else could actually pull off a line like "It was beauty that killed the beast"? To me, that was the true failing of the '70s version of the Kong movie - it didn't have that line, and it probably couldn't have a line like that.

Musician/ Writer/ Whatever Richard Hell opened the movie with a reading about King Kong and its dream-like quality that makes the movie effective still today.

There is something oddly, and I hate to use the word, but "poetic" about the simple structure, of man against the great beast, and the beast felled by beauty.

You're right: you add layers of "realism" or 1970's disenchantment, and you can't just tack on a line like that. It can only work in a storybook world.

I still love this movie. Loads of fun. Willis O'Brien's special effects blew me away as a kid, and are still impressive given the technology in 1933. I envy you seeing it on the big screen.