1.  It's our Sunday night thing when Mad Men is on to have some pals over and watch the show and maybe have a cocktail or two.  I did so.  I also saw Avengers today, but don't want to write about it right now, so there.

2.  Mad Men is doing something it has not done before, and that's build toward a sense of dread and doom throughout the whole season.  Also, f-yeah, Revolver.  I am going to now open my iTunes and listen to that album.

3. And Peggy.  I can't tell you how much I loved Peggy Olson in this episode.

4.  I have been "reading" my FCBD comics, and its sort of... are your comics disappointing this year, or is it just me?  I mean, I guess I get that they have to do promo stuff of a sort, but it would have been nice to get a full story the way Atomic Robo did.  The rest of them I've had time to read barely give a feel for the comic.

5.  I found the FCBD offering for The Ride pretty terrible.  Basically a clumsy "here's what happened" sequence on any cops procedural, only with a complete lack of context, and I have no doubt this will be some half-baked, half-assed work by some comic creators trying to be edgy.  After reading The Green River Killer, I'm reminded of what can be in a comic, and this...  this is just CBS police show junk.

6.  Again, it makes no sense that I have not read all of Atomic Robo.  There is nothing not amazing about Dr. Dinosaur.

7.  That said, FCBD was incredibly well managed at my local shop.  Frankly, Austin Books does a great job every year improving the experience.  I've gotten some reports that other shops ran out of some or all of their comics.  Sorry about that.  If I can help, let me know.  I can put things in the mail.

9.  I expect there shall be RiffTrax.  Perhaps even involving sparkly vampires.

10.  Hope you had a good weekend, and we'll rap tomorrow on Avengers.

11.  Late addition.  This is hilarious.  I as reading a quick preview of an upcoming comic (with toys attached), Jurassic Strike Force 5, and the Pterodactyl has boobs!

Oh, comics.  Sometimes you truly are the medium of awkward 13 year old boys. 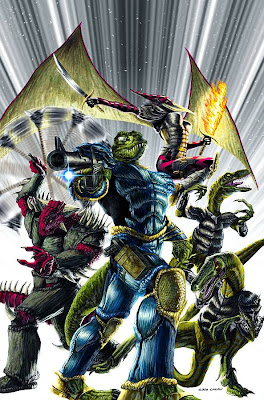 Atomic Robo is awesome. I reliably buy it every time a new collection is release on comixology. I have dreams of meeting the creators some day and buying all the trades from them in one fell swoop.