75th Anniversary of the Hindenburg Disaster

On May 6th, 1937 the airship known as The Hindenburg burst into flames, killing 36 people. 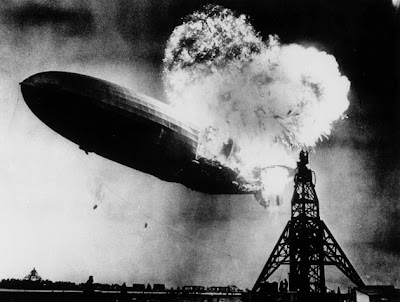 In many ways it's utterly shocking that only 36 died.

It may come to you as a surprise that I am NOT an expert in pre-WWII era airships or their design, so I really don't know much about the disaster other than that you really don't see people clamoring for blimp rides these days.

The Hindenburg was also supposed to be one of Nazi Germany's showcase Graf Zeppelins in America, so, you sort of have to have mixed feelings...

I'm not one to shy away from looking directly at a car crash scene, so if you want to see it, the footage from the disaster is up and online.  Learn where we got the phrase "Oh, the humanity!" that one declares when witnessing a disaster.

I took a history class, FDR to Bush (the first one), in college. The prof had us watch this and compare with the somber broadcasts of things like JFK's death. The take home idea was that news had become less sensational. I'm not sure that still holds.

Yeah, this seems positively restrained by today's standards. That said, the audio was recorded live, and my take away was "when a Graf Zeppelin explodes in front of you, and you're narrating, you are going to freak out a bit".