I've been intending to watch this movie since I saw Heavenly Creatures in the theater, but somehow it never happened.  That doesn't mean I haven't seen Birdemic five times in the interim, and hopefully that informs why my new policies regarding movie watching are about trying to rectify some past sins of omission.

Suffice it to say, I throw myself at the mercy of the folks who would tut-tut me for having never seen this movie before.  I am sorry.  But I have now seen it. 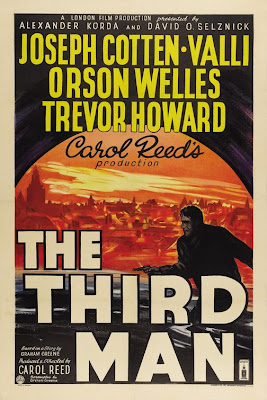 So, I think last summer's "Oh my God" movie was The Hustler.  You hear the names of these movies, and you catch them, and if it's a 50 or 70 year old movie people are still discussing, there's usually a reason why the audience hasn't let the movie go like the hundreds of others that came out around the same time.  But, as with all narratives (or, perhaps, art...  a word I sort of balk at using around here because...  gnngh.), you can recognize quality without something necessarily fitting neatly in your wheelhouse not really resonating with you on a any personal level.  And those are things that are hard to quantify in discussing movies.

Looking at The Third Man after this first viewing, I can say that I liked a script I felt was bone lean and tight as a drum.  I loved the characterization of the players, right down the line, especially Orson Welles' portrayal.  I loved the twisty plotting, continual menace and punchy humor.  The cinematography is phenomenal, of course, and the music is really pretty brilliant.  And you can't say anything negative about the dialog, especially the ferris wheel monologue.  But why did this work so well for me?

But it did.  And I really don't want to talk about it tonight other than to acknowledge that I saw it, I was floored by every scene, and I am glad I don't make movies, because I'd just quit, figuring "yup, that's what I wish I coulda made" and call it a day.  Maybe go raise llamas.

I've seen the movie classified as noir, and it's interesting to try to piece together why.  Unlike the usual domestic or petty crime stories I often associate with noir, this is more of a very taught suspense film hinging on post WWII issues in former Axis states.  But the fact is that it's also about a writer who gets in over his head, in no small part because of a beautiful girl (the stunning Alida Valli) - is probably key, even though that's even more complicated than usual.  It's set in Austria, features a post-WWII mishmash of nationalities, and is far more evocative of what I think people mean in 2012 when they say "noirish" when discussing cinematography than about 80% of actual noir, which is often darkly lit, but doesn't always push angles in crazy Batman villain canter-lever angles and is often a product of the cheap and quick production of the era.

So, noir it most certainly is.

I can't wait to give this movie a second go, if for no other reason than to put together everything again and hear some of the dialog.