Vertigo is now the ruler, and Citizen Kane is for losers

I've now lived long enough to see a new generation of critics come upon the scene, question their predecessors, and seize control of the ship of citable certifiables when it comes to tweedy theoretical film discussion.  Sight & Sound released a list of "The Best Movies" as voted upon by people who watch a lot of movies, I'd guess.  So, bully for them.

It's interesting to watch the next generation come up and see them carving out their own opinions and angrily making statements of defiance against the assumptions and dogma of their forefathers.  In comics, with the target age now around 20 years old for a reader for the Big 2, we've been seeing the kids kicking back against the assumptions folks around my age take for granted.  No longer do the old rules I understood apply such as  "Dark Knight Returns is a good comic" or "Watchmen isn't boring stupid people standing around talking".  "I am not impressed" say the kids.  "This is nothing compared to <insert title of recent comic by current creator>."  Also "Stop making me think as well as read words."


This move is a bit different.  This isn't young kids wanting to believe that NOW is the most important time and NOW, WHEN I CARE is making the the best comics.  This is a gang of film fans with a different idea of what made the films good or great.

In Film 101, you, of course, watch Citizen Kane.  You sort of nod your way through, and it's a fantastic movie, no doubt.  The lights come up and the PhD candidate teaching your class says "Why is this movie considered the best film ever?"  And at age 19 I was mostly walking around in a haze of confusion at all times.  So, yeah.  Tell me: Why?  Because all I know is that I've seen a movie I liked, and it doesn't jive with other movies I've seen from that era.


But does that make it the best film ever?  What if the criteria shifts?  What if, instead of the criteria being "what changed the way we make movies?" to "what is the most filmy film that ever filmed?"

In a lot of ways, I'm shocked Vertigo was the answer.  Don't get me wrong, I LOVE Vertigo.  After all, it gave us this image: 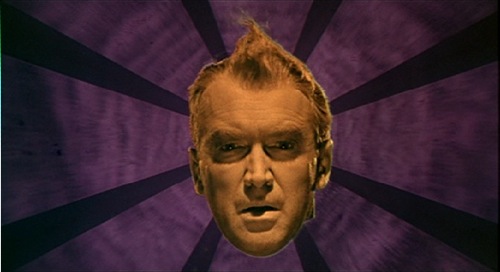 I don't even question that by some criteria, it's the best movie, ever.  Maybe we're past caring about acknowledging achievement or innovation?  Because that seems to be the difference in the two opinions.

Do we keep celebrating a movie many people find a tad dull because "holy smokes, look at the camera work!  What year was this?", or do we celebrate the character rending and pitch-perfect attention to detail that are the hallmarks of Vertigo?

Of course all lists are ridiculous.  We treat it like the list means something.  With the Olympics on, we might compare it to who lifted the most weight or who ran the fastest, but that's an objective measure.  No matter how much we'd like to say otherwise, the pick for the best film ever is made on a sliding scale.  And, of course, it's named as part of a list.

The internet survives on lists, from countdowns of the unbelievable at Cracked.com to some list at Pitchfork naming the best bands or songs or whatever, and we all look at the list and say "now how the @#$% did they come to that conclusion?"  And, in many ways, it sort of undermines everyone's credibility when they put themselves out there with a (I'm sorry Sight and Sound) subjective film list.

In a way, one has to look at the list and wonder about the race to the bottom that has to happen when you try to get a group of people to think about "no, honestly.  Scrap all pre-conceived thought.  What is the best movie you've ever seen?  Now name fifteen."  Hilarious.

I'm not going to lie to you people.  Of these ten, I've seen five films.  Vertigo, Citizen Kane, The Rules of the Game, 2001 and The Searchers.  I'd be curious to see The Rules of the Game again, because I mostly remember being so bored by the movie when I watched it at age 19, I was struggling to stay awake.  That's not a dig on the movie, that's a dig on the tastes of a 19 year old who was really into Schwarzenegger movies.

What I guess I find interesting is that Vertigo is, in many ways, a much smaller and less ambitious film than Citizen Kane.  A beautifully crafted, taught noir thriller, it's kind of about a small number of people working through an extreme period in the lives of the leads.  My recollection (it's been years since I've seen the movie) is that it's a movie about the story of the movie, a self-contained parable of identity and obsessions.

Citizen Kane spans decades, satirizes the most influential man in the world at the time of it's release, holds a mirror up to much of what we consider grand about the American Dream and we find the face the sort of thing you look at in the mirror at three in the morning when you're trying to figure out if it's better to just throw up or try to go to bed with the spins.  Whether it's a "better movie" or not, from a technical and story-telling perspective, I simply respect Citizen Kane on a different level.

But, you know, that's one of those things I find interesting about taste in movies.  I'm fairly aware of the fact that even trying something on a larger scale is going to win you serious points in my book.  As clunky and awkward as the Nolan Dark Knight Trilogy may have been at times, I had to salute the sheer audacity of the task and what he was trying to accomplish that other directors of movies like The Amazing Spider-Man would never have dreamed of even attempting.

That's not to say I don't like smaller movies.  For goodness sake, how much time do I spend talking Film Noir around here?  And certainly making any movie that's tightly scripted, acted and directed is a feat so rare that we're still coming back to Hitchcock's various movies decades later.

But I have to wonder about the changing perceptions of what makes the greatest film of all time. Or the tastes or preferences of those claiming the right to name the movie.  Is there a shift to the smaller, more personal story where less is left to be told in the missing pieces or in the smaller cast and more pragmatic timeline?   Is there a desire for the personal connection with Stewart's Scottie Ferguson than Welles' Kane?

I've no idea.  But I really recommend reading Horus' post on the evolving language of film to see if there are any clues there for how this movie may be reaching audiences better in 2012 than it was with previous audiences.

But it is interesting - of the movies that try to do what Vertigo does, Hitch's movie arguably does it very, very, very well.  And there's something to that.  If you're looking for a thriller, this one's required viewing.

Citizen Kane has it's Magnificent Ambersons.  The interesting thing about Vertigo is that, unlike Welles' output, your average undergrad has seen a handful of Hitchcock films, and I kind of wonder - if you asked those same critics what their favorite Hitch film was, would they all have named Vertigo?

Anyhow, I just feel robbed that the most deserving of films once again did not make the list. 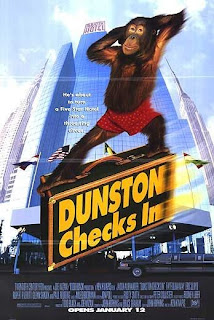 For the record, I don't believe in such a thing as "greatest film of all time" -

- but if I did (at least " . . . of all time up to today") I can damn well tell you neither Citizen Kane nor Vertigo would even make the top ten.

In fact, of the BFI top ten, only Rules of the Game and Joan of Arc are even contenders.

I know, and I was trying to anticipate your picks with "Dunston Checks In".

That's kind of the problem, I guess. While weighed voting matters, I suppose, it's the weighed voting of a self-selected list of folks who care about Sight & Sound to begin with.

A list is an interesting springboard for conversation, but it's also a direct challenge to the reader. I suppose someone out there takes these lists as definitive, and I feel kind of sorry for those people. Hopefully people have enough of a sense of independence not to just parrot back lists from magazines.