We read more Parker: "The Seventh" and the graphic novel of "The Score"

The Seventh is, probably not-coincidentally, the seventh book in the Richard Stark (pen name of Donald Westlake) series of books about Parker, the tough guy master criminal who first appeared in The Hunter.

In this volume, following a particularly well-planned and executed heist that should have landed him a nice chunk of change (something sorely needed after the disastrous conclusion of The Jugger), Parker is hiding out and playing it cool when he comes back from a quick trip out for cigarettes and beer to find the girl he's been shacking up with stone cold dead in an apartment that's still locked and shows no signs of forced entry. And, of course, not just Parker's take (his seventh) is gone, but the whole take from the heist.

Stark never explains Parker, never spends time on much other than notes about characterization, and there's never a why.  All we see is Parker on the job, and it's not some writerly oversight.  Nobody gets insight into what makes Parker tic - be it his partners, the people he goes up against, or the reader.  We know he doesn't like small talk not just because the limited omniscience narrator tells us, but because Parker tells people rattling on at him to shut up, and he seems to appreciate the slain girl not just for her bedroom acrobatics, but for her agreement that they can sit in silence for hours if they've nothing to say.  But we never see a young Parker becoming Parker (at least by this seventh book).  Heck, we never even know his first name.

This book follows what happens not when a heist goes wrong, or a run in with the Outfit, but the unexpected occurring, and throwing Parker off his game.  We always get to see little pieces of Parker, and this book gives us an opportunity to see Parker wrestling a bit with making the smart move versus doing what he wants to do from a gut level once he's been shown up.


The book is as brutal as anything else in the Parker series, starting with the murder of the girl and spiraling wildly out of control with Parker moving through the hurricane like a juggernaut.

Nobody is ever going to accuse Stark of perfecting how one writes a gorgeous book for a literary crowd, but his prose are deceptively simple and straightforward, the working man's language that reflects Parker's world - just as Parker is easily mistaken for a lumbering thug, the understated approach belies the narrative intricacies and characterization that arrives for a wide cast of characters in short bursts built on what characters do rather than relying upon excessive description.  And maybe there's something to how easily dismissed the dimestore novel has been in American literary culture.

I do admit it can be a bit hard to buy some of details regarding the actual heist, and while it all seemed reasonably well thought out, I did choose to just buy it because that's what the story wanted to say and willingly suspend disbelief rather than raise a lot of questions that were unnecessary in the course of the story.  After all, this wasn't a book about a heist, it was a book about what goes wrong after the heist, and from that perspective, I was fully onboard.

A very fast read, clearly a paperback novel, but one with a lot of craft and clever plotting.  While the story feels smaller and more episodic than The Hunter, The Outfit or The Score, it's no less a pretty darn tight Parker story.

Speaking of The Score...

Adapted from the fifth book in the Parker series, this is the third full-length adaptation by artist Darwyn Cooke.  As much as I enjoyed the book of The Man with the Getaway Face, there's no doubt it was best served by the one-shot comic Cooke put together leading up to The Outfit.  Skipping The Mourner wasn't going to lose anybody anything other than getting to know Handy McKay.

And can I start by saying how much I loved the cover? 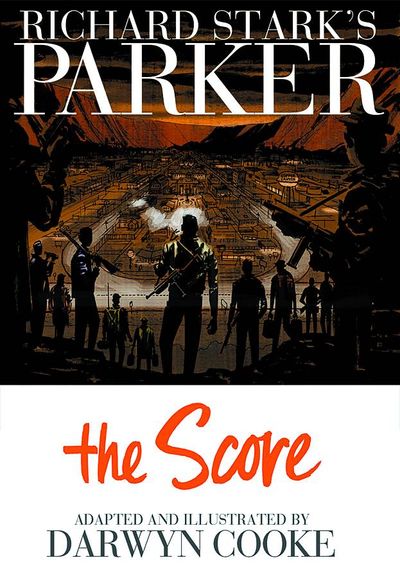 If you know the novel, it perfectly conveys the spirit of the book, and if you don't, it's certainly enough to make you wonder what the hell is happening here.

I picked up the novel of The Score without reading the plot synopsis, so when I flipped it over and read what it was about, I almost laughed.  Parker and a herd of crooks are recruited to heist an entire small town in the Badlands, centered around a mine and surrounded on three sides by mountains.


Much like the previously adapted The Outfit, it features several characters moving at the same time in clockwork precision, and chaos that comes from the fact that each of those people, no matter what they say as they come onto a job, is an individual with their own motivations and quirks.

Cooke adapts the razor sharp timeline of the book with an even greater precision here than in The Outfit, manages to use visual cues and some recasting to provide Parker's squad with enough personality and quirks to separate one from the other (casting some comics creators in certain roles, such as Steranko as Pops).

As will always happen in an adaptation, some of what's on the page gets lost, and the story feels more compact with less detail sorted out, doing what comics do best and showing the action sequences and the actual heist in action instead of crooks jawing on about how to best resolve their technical challenges.

The art is spot on.  While I'll always enjoy a Darwyn Cooke page, this books uses page layout and panels-per-page to keep the action flowing, create a sense of the boxed in feel of the actual heist, and managing both set and pacing.

Cooke's period-style illustration and cartooning fit neatly into the mid-60's world of this Parker novel, and his ability to keep all of the characters visually distinct is a trait I assume every artist in comics should envy.  But the style never overcomes the believability of the scene, only working as a resonant wave to better relay the story.

I loved the Grofield pages - a seeming throwaway in the novel, but as we know Grofield has his own line of books running parallel to the Parker novels, and Cooke clearly has a good feel for who this guy is - and its this sort of thing comics can do seamlessly, the break in theme or mood, without the change feeling a bit too cutesy.  It's all still Cooke's look and feel, complete with the yellow wash, but we get a look inside Grofield's skull and it's such a different world from Parker's, it's hilarious to think of these two working side by side.

And, of course, nothing is ever as simple as it should be.  Someday I'll write a post about Parker as the ultimate Project Manager, but we'll save that for another day.

Cooke keeps directly to the Stark text, and in that, seems to make a healthy decision to maintain as much of Stark's intention and make his mark on the character through visual interpretation rather than trying to improve on the story at hand - a common issue with the filmic adaptations of Parker novels, from what I've read.