Signal Reads: The Spy Who Came in from the Cold

I was born into the Cold War, and I often wonder if The Kids whose sense of awareness crested after 1992 really understand what it was like.  As far back as 2001, I was taking a martial arts class where the "adult" class meant high school and up.  After class we were putting on our shoes and chatting and somehow I managed to ask one of the kids if they even knew what The Cold War was.  Long story short, he knew it had something to do with Russia, but he didn't know why we may have been in conflict with The Russkies. 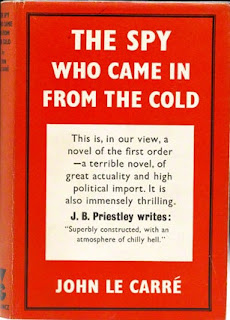 It's now been more than 20 years since I sat in class and watched video of Germans dancing on the wall, and I still don't really understand how one day we had An Evil Empire with whom we were locked in the world's worst staring contest, and the next, we had Eastern-block countries cut loose from Mother Russia and spiraling into fresh, new problems (see: Sarajevo) and Russia deciding that a government based on something that looks an awful lot like gangsterism should take the place of the death-mask Stalinist taskmasters.*


John le Carré's novel of The Spy Who Came in from the Cold was released in 1963 and sits somewhere on the opposite side of the spy-novel business from the work of Ian Fleming.  To the last page, it's a novel about the spying industry as a de-politicized, de-humanized game of pieces on a chess board moved by the Bobby Fishers of the sport.

Alec Leamas is recalled from West Berlin (hey, remember when Berlin had two halves?  That was @#$%ed up) where he's been station chief for operations, but things have gone poorly the past year.  He's given one last chance to get some work done and take out his former-Nazi, East German rival, if only he can play the game correctly (all while the players around him strategize and move their own pieces).

Soon enough, Leamas in embroiled in a plot with moving parts he wasn't expecting, and his personal life (what's left of it) threatens to intersect with the gamesmanship of the spygame.  Really, to tell much more is to give it away, and I enjoyed listening to the audio book enough, that I'd recommend the book to anyone.

In many ways, it's a quick trip down the memory lane of what was going on as late as the end of the Reagan administration when the folks on the other side of the curtain weren't of a near-alien ideology to own Americanism, but understood and knew how to rattle westerners in a way that our current ideological opponents never will.  How one perceives the book in the hindsight of 50 years after publication is another question.  Some of what the book posits was likely far more groundbreaking in the early 60's and the pre-Vietnam era than after decades of cynicism in regards to the government and stories occasionally breaking on actual international espionage.

The book isn't brutal in the graphic sense, but it is fairly uncompromising when it comes to the lives and state of moral ambiguity in which those in the world of espionage as their day job come to expect and how they expect it of one another.  As one of the first of it's kind, which would go on to inspire all sorts of books and movies, and one in a line of John le Carré novels which seem to have sprouted the genre in and of itself, allowing for the Tom Clancy's and other more "realistic" writers to gain traction rather than just high-flying heroics, it's probably worth looking into.

Personally, I appreciated the pragmatism as discussed and the subtextual conflict of ideology versus reality that takes us all the way to the last page with questions I think you have to infer the answer to, as le Carré isn't going to let the reader off the hook by spoon feeding them the answer.