Much has been made of Palmer in recent months as she released yet another album not just independent of any label, but by asking her fanbase for about $100,000 via Kickstarter and came up with $1.2 million.  As Palmer mounted her tour, her usual routine of recruiting local talent to help out in what's always a pretty raucous stage show, was met with a sudden and vociferous bit of controversy.  Apparently a lot of musicians who were in no way involved got mad that Palmer was asking for volunteers, and, anyway...  it got ugly.

Keep in mind, Palmer is far from the only artist who has folks sit in, includes local marching bands, choirs, whatever...  But because these were horn and string musicians, somehow it became a big deal.  Anyhow, it all ends happily with Palmer shuffling her budget, not doing a music video or something, and coughing up cash so people would get the @#$% over it.

I tend to think of rock and roll as having far less whining associated than what folks were tossing Palmer's way, and as many people I personally know (this is Austin) who play for free all the time, I couldn't really wrap my head around it.  It's a rock and roll show, and, no, you're not going to convince me otherwise when it comes to Palmer somehow undermining the payment of musicians when she's inviting collaboration with locals.  You psycho.

By the way, while you're getting mad at Amanda Palmer, you can download the new album for whatever you can or feel like paying.  Here you go.

Fast forward to today, and Palmer's album, Theater is Evil, has debuted on the Billboard top 200 at position #10.  Not bad for a record by an artist that has no TV coverage, no label support and has never had it's featured artist on American Idol.

You'll have to forgive me re: the pictures.  I was using my iPhone.  I'm a lousy photographer to begin with, and the stage lighting and the limitations of the iPhone's digital zoom capability were wreaking a bit of havoc. For fun, though, let's pretend this was all intentional and I'm just a really un-self-aware but hilariously lousy artist. 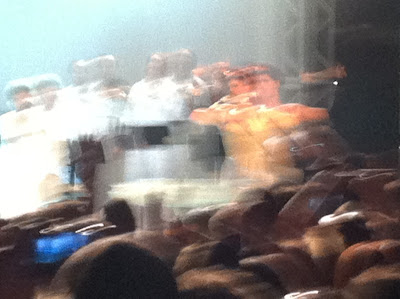 If you've never seen Palmer live, don't worry about the fact that the music isn't your cup of tea.  She's a performer first, and the band knew how to put on a heck of an entertaining show.  That said, I happen to think Palmer is an incredibly gifted songwriter first, and she happens to know how to sing and perform the hell out of her own work.

Despite the clear rock/pop home of the music, I think Palmer's work is very storybased, much more so than the average 3 minute pop song (I get the point of your average Beyonce tune, but if you hear the hook, you've more or less got the idea).  Most of Palmer's songs are character-based and watch a story unfold, and I think was true during her Dresden Doll days as much as now.

One day, it'd be nice to see someone put a book to Palmer's work and see what sort of show we'd get. 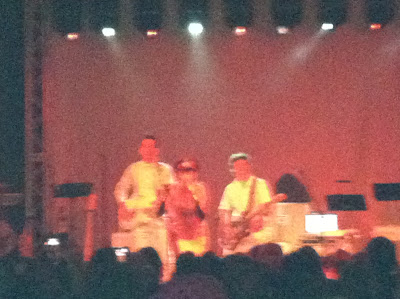 I was telling Amy en-route that part of why I quit doing shows is how awful I find the crowds, but this was a great audience.  They weren't there to be seen, they were there to see and hear.  And there was a palpable difference between this show and the last show I saw at Austin Music Hall where everyone was on their cell phones texting and talking to their neighbor.  Nope, here the eyes were on the stage, and I think you can lend that in no small part to the ROCK SHOW that was happening up there. 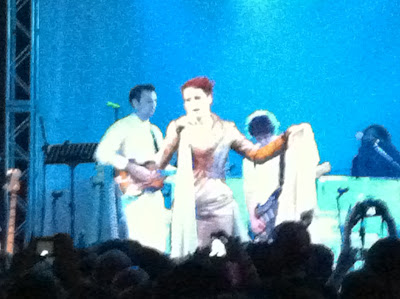 During "Bottomfeeder", Palmer rode the crowd while trailing a magnificent, parachute-like train behind herself.  You can see the picture below where Palmer is drifting off just as I realized "hey, this might make a nifty photo opportunity". 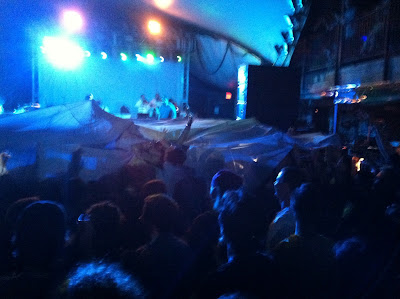 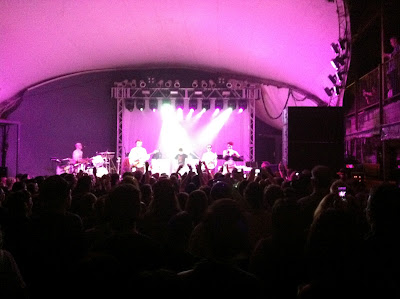 Credit where it's due.  Palmer's band is clearly more than just a few dudes with three-chords and a dream.  There's some obvious musicianship in The Grand Theft Orchestra that went well beyond even your better typical rock bands - including the string and horn arrangements which she credited to the band, and their ability to swap off instruments multiple times in a single song.  Good times. 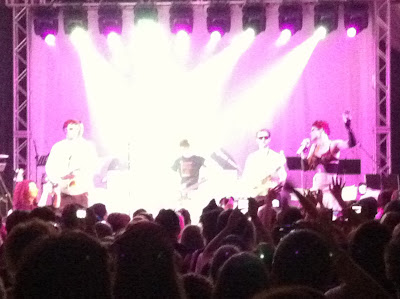 That's all I really have to say about that.  Palmer hasn't sold out everywhere, so if you have a chance to still get a ticket, we're recommending you go.  She's headed to the West Coast, so, kids, check your local tour dates.
Posted by The League at 9/20/2012 12:03:00 AM

Really nice review. Looking forward to her tour stop in Milwaukee in a few weeks!

You guys will not be disappointed. The band is rock solid.

that show was a blast! I happily bought the CD today and have been rocking out all day. Here's the tiny desk concert link: http://www.npr.org/event/music/161152883/amanda-palmer-and-the-grand-theft-orchestra-tiny-desk-concert